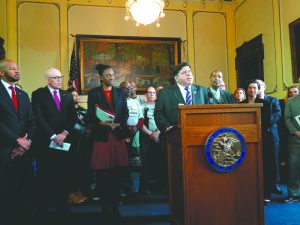 Gov. J.B. Pritzker, public health advocates and state lawmakers unveil “Getting to Zero,” a strategy for halting the HIV epidemic in Illinois by 2030 during a Statehouse news conference May 14. (Photo by Peter Hancock/Capitol News Illinois)

SPRINGFIELD — Gov. J.B. Pritzker and several public health advocates outlined an ambitious plan Tuesday to halt the spread of HIV in Illinois by 2030.

Speaking at a Statehouse news conference, Pritzker unveiled a multi-pronged strategy called “Getting to Zero” that calls for expanding access to antiviral drugs for people already infected with the virus, and preventive medication — known as pre-exposure prophylaxis, or “PrEP” — for people who are at high risk of contracting the disease

“While this virus’ most horrifying and unsparing days may be behind us, we know that the disease rages on,” Pritzker said.

“Over the last few years, we’ve seen HIV prevention funding dry up,” he added. “HIV testing rates have gone down, and HIV prevention and treatment agencies have laid off staff. I have always said that health care is a right, and not a privilege. All Illinoisans deserve access to that right, and that includes those who are living with or vulnerable to HIV.”

It calls for increasing investments over the next five years to expand the HIV health care and public health workforce, increase access to PrEP and use data to target resources to the most at-risk communities. It also aims to increase funding for treatment of other conditions that often accompany HIV infection and AIDS, including mental health services, substance abuse treatment, and screening and treatment of other sexually-transmitted diseases.

“This plan paves the path towards the day when there will be zero transmissions of HIV in the state of Illinois and every person living with HIV will thrive,” said John Peller, president and CEO of the Chicago AIDS Foundation. 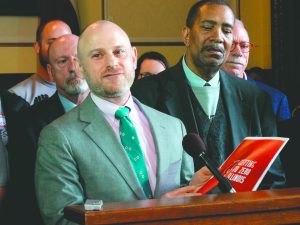 John Peller, president and CEO of the AIDS Foundation of Chicago, outlines the strategies Illinois will use through the “Getting to Zero” plan for halting the spread of HIV in Illinois by 2030. He spoke during a news conference Tuesday, May 14 in Springfield. (Photo by Peter Hancock/Capitol News Illinois)

Peller said that to eliminate HIV transmission in Illinois by 2030, the state first needs to focus on achieving two goals over the next five years: increasing by 20%age points the number of at-risk individuals who are taking PrEP and the number of HIV-positive individuals who are “virally suppressed,” meaning they are taking HIV medications and the virus is not circulating in their body.

“Not only does this increase their individual health, but scientific evidence shows that when someone’s viral load is undetectable, they cannot transmit HIV to their partners,” Peller said. “HIV treatment has incredible benefits for individuals and for the community to prevent new cases of HIV. But today, just 50% of people who are living with HIV in Illinois are virally suppressed.”

PrEP is the common name for the drug Truvada, which was released by the pharmaceutical company Gilead in 2012 as a once-daily pill to reduce the risk of HIV infection in high-risk adults.

House Majority Leader Greg Harris, a Chicago Democrat who is HIV-positive, noted that next month will mark the 38th anniversary of the first identified case of AIDS being reported by the Centers for Disease Control and Prevention.

“And over that time, I know I’ve lost an uncounted number of friends,” he said. “A cure is a long way off, but we still have an option for treatment and prevention today.”

In Illinois, however, one of the biggest barriers to treatment and prevention for many people is the inability to access the state’s Medicaid program. Pritzker acknowledged that huge backlogs of applications for initial and continuing coverage under the program have prevented many people from receiving the treatment they need.

But he said fixing that problem will be a high priority for his administration.

“If you give us a little bit of time, we’re going to announce what we’re working on and how we’re working down that backlog,” he said.