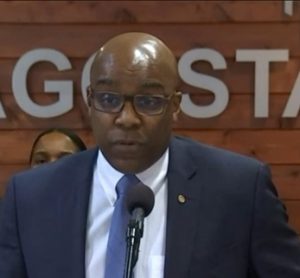 SPRINGFIELD — Illinois Attorney General Kwame Raoul announced Tuesday, April 13 that his agency’s office internet network was discovered to be “compromised” on Saturday, according to a news release.

“In the early hours of Saturday morning (April 10), it was discovered that the office’s network was compromised. Since then, information technology staff and investigators from the Attorney General’s office have been working closely with federal law enforcement authorities to evaluate the extent to which the network was compromised,” Raoul said in the release.

“This investigation is ongoing, and I am committed to resolving this situation as soon as possible to ensure that the Attorney General’s office can continue to provide critical services to the people of Illinois.”

Thompson did not comment on whether the office internet network remains “compromised,” or whether the issue has been resolved.

The release states that an “investigation into the extent to which the Attorney General’s office’s network was compromised is ongoing,” and more information will be made available at a later, undefined date.

Thompson also did not respond to questions about how the AG’s office made the discovery Saturday, how many employees and members of the Attorney General’s Office staff were affected by the breach, or the nature of the incident that led to the agency’s network being “compromised.”

The announcement about the attorney general’s office network comes about a week after the Illinois State Board of Elections revealed that its executive director was placed on leave after being the subject of an online extortion attempt.

The eight-member elections board voted April 5 to place Director Steve Sandvoss on leave.

The attempted extortion “appeared typical of many such online scams,” according to an agency news release, and ISBE officials do not believe “any election data or information has been compromised.”

The elections board convened a special meeting Monday, April 12 and met in closed session for about an hour and 45 minutes to discuss personnel and litigation matters. They adjourned the meeting without providing any additional information.

ISBE spokesperson Matt Dietrich said the board took no action in executive session.