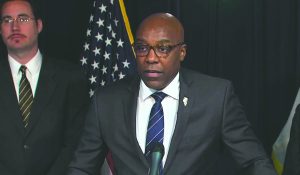 Illinois Attorney General Kwame Raoul, as part of a coalition of 21 states, has filed a lawsuit challenging the federal government’s effort to allow 3D-printed gun files to be released on the internet.

The files would allow plug-and-play access to 3D-printed unregistered, untraceable firearms, sometimes called “ghost guns,” that are virtually undetectable even with a metal detector, Raoul said.

Following a multistate legal challenge, a federal judge last year struck down the federal government’s prior attempt to allow the release of the files. Now, the coalition said, the administration has embarked on a new effort by pursuing formal rules, which were finalized Thursday, Jan. 23. Raoul and the coalition filed the lawsuit Thursday in Seattle in the U.S. District Court for the Western District of Washington, arguing the rules are unlawful.

“Communities throughout our nation are evaluating policies to combat gun violence. The availability of 3D-printed gun files on the Internet would directly undermine the ongoing work being done to improve public safety,” Raoul said. “I will vigorously oppose any action that will make it easier for unregulated, untraceable guns to be brought into our schools, neighborhoods and churches.”

In 2015, Defense Distributed, an organization dedicated to the global distribution of open-source, downloadable 3D-printed gun files, sued the Obama administration after the U.S. State Department forced Defense Distributed to remove the files from the Internet. The federal government successfully argued before federal trial and appellate courts that posting the files online violates firearm export laws and poses a serious threat to national security and public safety. The U.S. Supreme Court declined to hear the case.

In an abrupt reversal, the federal government settled the case in June 2018 and agreed to allow unlimited public internet distribution of the downloadable files for 3D-printed guns, and a coalition of states filed a lawsuit in July 2018. Despite a federal judge’s ruling that the federal government’s decision to allow the files’ distribution is arbitrary, capricious and unlawful, Raoul said the administration is trying again — this time by publishing new rules that would transfer regulation of 3D-printed guns from the State Department to the Department of Commerce. The regulatory change would effectively allow their unlimited distribution.

In the lawsuit, Raoul and the coalition argue that the rules are unlawful for reasons like those presented in the 2018 multistate lawsuit. The administration has still offered no evidence supporting its about-face on the risks of allowing unregulated access to firearms worldwide, making the rule arbitrary and capricious, in violation of the Administrative Procedure Act, the coalition contends. In fact, opponents said, the administration agrees that regulation is needed, even though its new regulations are toothless and will not prevent the global dissemination of 3D-printed guns.

Coalition members said the Department of Commerce acknowledged in the rules that regulating the distribution of 3D-printed gun files does not violate the First or Second amendments, as some critics have claimed: “Limitations on the dissemination of such functional technology and software do not violate the right to free expression under the First Amendment. Nor does the final rule violate the right to keep and bear arms under the Second Amendment.”

However, due to loopholes in the commerce regulations, Raoul and other opponents said, the department will lack the power to regulate 3D-printed guns in any meaningful way.

In the rules, they said, the administration also acknowledged the dangers posed by the distribution of 3D-printed gun files, saying, “Such items could be easily used in the proliferation of conventional weapons, the acquisition of destabilizing numbers of such weapons, or for acts of terrorism. … The potential for the ease of access to the software and technology, undetectable means of production, and potential to inflict harm on U.S. persons and allies abroad present a grave concern for the United States.”