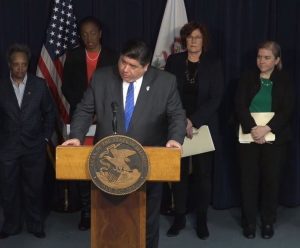 Gov. J.B. Pritzker announces that bars and restaurants in Illinois will be closed to the public starting Tuesday, March 17, through March 30 as part of a statewide effort to control the spread of COVID-19, which has been declared a global pandemic. Pritzker made the announcement during a daily news conference regarding coronavirus Sunday in Chicago. (Credit: blueroomstream.com)

SPRINGFIELD – Illinois Gov. J.B. Pritzker took an unprecedented step Sunday to stem the spread of the coronavirus pandemic by ordering bars and restaurants in the state closed to the public starting on Tuesday, March 17, which is both St. Patrick’s Day and Illinois’ Primary Election Day.

Establishments will remain open to drive-through and delivery service, but in-store dining will be closed through March 30. Restaurants and bars must close at the end of their business day Monday.

Schools will continue to provide meals to children, although classes in both public and private K-12 schools have been cancelled during that same period.

“I know how difficult this will be on small businesses around the state,” Pritzker said during his daily news briefing Sunday in Chicago. “This is another hard step. But we must do everything that we can to safeguard the health and safety of the citizens of the state of Illinois. And that requires urgent action.”

Sunday’s actions were just the latest in a series of measures Pritzker has taken that, together, amount to what may be the broadest-scale shutdown of social activity in modern memory in Illinois, even surpassing the security measures taken in the immediate wake of the terrorist attacks of Sept. 11, 2001.

But the actions also are in line with guidance from the Centers for Disease Control and Prevention and other public health officials who say “social distancing” is one of the most effective ways of controlling the spread of the virus, for which there is not yet an effective vaccine.

In addition to ordering bars and restaurants to close to the public, Pritzker also directed state agencies to scale down operations while maintaining core functions and essential services. That means select employees will continue to report to work while others will either work remotely or remain at home, on call. All state employees will continue to be paid during the work stoppage, the administration said.

Sunday’s briefing capped a weekend in which Pritzker engaged in a high-profile battle with the White House over its handling of the coronavirus outbreak, a battle that began when hundreds of international travelers returning to the United States were bottlenecked Saturday night at the Customs and Border Control checkpoint at O’Hare International Airport in Chicago.

In a tweet directed specifically at the Trump administration, Pritzker lashed out.

“The crowds & lines O’Hare are unacceptable & need to be addressed immediately,” he tweeted. “@realDonaldTrump @VP since this is the only communication medium you pay attention to — you need to do something NOW. These crowds are waiting to get through customs which is under federal jurisdiction.” 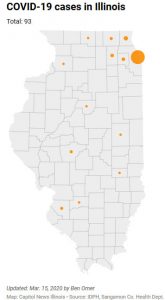 Where cases of coronavirus have been confirmed in Illinois as of Sunday, March 15. (Graphic by Ben Orner of Capitol News Illinois)

Speaking Sunday morning on NBC’s “Meet the Press,” Pritzker accused the federal government of falling down on the job and leaving states to their own devices in responding to the pandemic.

“We are the ones who’ve had to provide the leadership because the federal government just has fallen down on this,” he said. “So, they didn’t advise us to shut down major events, sporting events, parades; we made those decisions on our own. They are not the ones that advised us to close schools; we made those decisions on our own. So, we are on our own out here. I wish we had leadership from Washington, we are not getting it.”

Illinois’ U.S. Sens. Dick Durbin and Tammy Duckworth, both Democrats, also sounded off Sunday about the situation at O’Hare and other major airports in a letter to Chad Wolf, the acting secretary of the Department of Homeland Security.

“Not only do these extensive wait times cause issues for the airport and its travelers, but given the ongoing COVID-19 (coronavirus) pandemic, it increases the risk for the City of Chicago and all who pass through it, as it contradicts current public health guidelines for masses of people to be in such close proximity to one another at this time,” Durbin and Duckworth wrote. “We request that you expedite the process of providing guidelines and the necessary resources, including staff and any required screening apparatus and processes, to these 13 airports to ensure their operations are not disrupted and that public health is preserved.”

By Sunday afternoon, Pritzker began downplaying his tensions with the White House, saying he had been assured personally by Vice President Mike Pence that Customs and Border Patrol would double its staff at O’Hare.

“I don’t usually get heated on Twitter, and I always try to work through official channels when possible,” Pritzker said during the briefing. “But when I saw hundreds of people crammed together for many hours at O’Hare, in exactly the conditions I have been warning about for days, I was furious.”