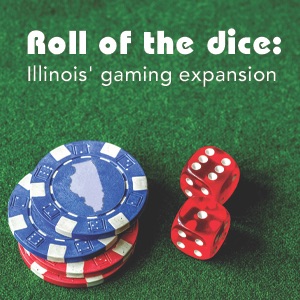 The expansion of gambling in Illinois could turn the Prairie State into the Land of Lincolns.

But just where to drop those extra $5 bills with so many neon lights blinking in your face? The Illinois Lottery instant games await just a vending machine push of the button away. The nimble fingers of the convenience store clerk can easily punch in those lucky Lotto and Powerball numbers for you.

Maybe this is the night to head to the casino: everyone in the ads seems to be having fun. Or maybe a Throwback Thursday at Arlington Park, gambling the only way people did legally in the early 1970s.

The number of gaming opportunities has tripled in Illinois since fiscal year 2013.

And that is before Illinois gets six more casinos, more video gaming machines and higher betting limits per establishment, more games per casino, “racinos,” (combining horse-racing tracks and casinos), and soon-to-arrive sports wagering.

It may not be too far down the road when you pass your time waiting for a flight at Chicago’s O’Hare or Midway airports dropping coins in a slot machine or pushing in chips at the craps table as both airports now have authority to add casino gaming to their sites.

This spring, state lawmakers approved adding six casino licenses to the 10 already on the state books.

The new gambling meccas will be a land-based casino in Chicago and riverboat casinos in Danville, Waukegan, Rockford, southern Cook County and Williamson County.

However, are more casinos the answer when gaming-related revenue from casinos has fallen 18 percent since fiscal year 2012?

Video gaming is the new kid on the block — around only since 2013 — and has put a dent in casino revenue, a new report from the state’s Commission on Government Forecasting and Accountability finds. This year marks the third consecutive year that video gaming has put more money in the state coffers than casinos.

Chicago currently does not allow video gaming within its limits, but Mayor Lori Lightfoot admits that with an $838 million shortfall nothing is off the table.

During a Sept. 4 town hall about the budget, Rick Heidner told the mayor that video gaming could bring in $50 million to $70 million annually for the city. An industry proponent as the owner of Gold Rush Gaming, Heidner said Chicago is one of only 100 municipalities in the state that does not allow video gaming and that the gambling tool would allow the city to fill multiple vacant storefronts.

“I’ve definitely heard a lot about that idea,” Lightfoot said.

A woman plays a video slot machine. Video gaming put $395 million into the state coffers in fiscal year 2019, the third time the gambling option has outpaced casinos in generating money for the state.

While video gaming is doing more of the heavy lifting in terms of gaming revenue, video gaming and casinos provide a strong revenue source, although, even combined, the two do not equal the money ($735 million) put into state coffers by the lottery.

“When combined, revenues from these two gaming formats (casinos and video gaming) have increased from $1.641 billion in FY 2012 to $2.940 billion in FY 2019, an increase of $1.299 billion,” the Commission on Government Forecasting’s report, “Wagering in Illinois: 2019 Update” stated.

In Fiscal Year 2019, the state’s share of tax revenue from wagering in Illinois reached $1.4 billion, a 3.5 percent increase from FY 2018 levels. The continued growth of video gaming tax revenue paid into the state’s capital projects fund (a $48 million increase in FY 2019 to $395 million was more than enough to offset the relatively stagnant performances from lottery transfers (up $3 million to $735 million), casino gaming transfers (down $3 million to $269 million) and from state-related horse racing revenue (held flat at $6 million), according to the commission.

Will more gaming draw tourists, an increase in gambling from untapped resources such as central and southern Illinois, and bring back Illinois residents taking their gambling over state lines? Only time will tell.

Members of the Commission on Government Forecasting said that even though millions in new tax revenue could be gained through gambling expansion, because of competing states and other factors, the potential windfall “is not near what it used to be.”

Commission members warned in their report that a tapped-out market could lead to all gaming interests dividing up a finite pool of revenue.

“The potential exists, that even with gaming expansion, when accounting for possible market saturation, the cannibalization impact on other gambling options and the corresponding lowering of the effective tax rates of the casinos, the state could have a large expansion of gambling, but yet have only modest levels of additional tax revenue to show for it,” commission members wrote in their report conclusion.