The state’s latest tourism campaign features native Illinoisian and award-winning actress Jane Lynch, who also makes her directorial debut in the series of ads that will run this spring and summer. (Illinois.gov)

Lynch is making her directorial debut with the campaign’s new TV ads.

The ads will run in 20 markets across Illinois and seven neighboring states and will be seen on cable nationwide. A Spanish-language ad will also air in the Chicago market. To view the ads and other media assets for the “Middle of Everything” click HERE.

“Middle of Everything” highlights Illinois as the center of culture, food, history, architecture, nightlife, and natural wonders – full of experiences for visitors to discover. An alum of Chicago’s famed Second City and Steppenwolf Theatre, Lynch brings her comedic zest and energy to the ads along with a deep-rooted passion for promoting her home state.

The production of the TV ads was a Screen Actors Guild (SAG) project featuring a diverse cast of Illinois actors.

“We are thrilled to partner with Illinois’ own Jane Lynch, the perfect ambassador to promote our state, in this new tourism campaign,” said Gov. J.B. Pritzker. “This campaign is a significant next step to aid our state’s tourism recovery and positions Illinois for future growth and success that our entire state can rally around — helping our economy, boosting tax revenues, and putting people back to work.”

In the “Middle of Everything,” Lynch stars as Illinois’ official tour guide showcasing iconic attractions in Chicago, Springfield, Historic Route 66, and the Garden of the Gods in Shawnee National Forest in southern Illinois.

The new TV ads feature authentic Illinois experiences and destinations to discover all around the state. Locations include the Route 66 Hall of Fame and Museum in Pontiac, Cozy Dog Drive In, located in Springfield, and the Grafton Sky Tour, as well as experiences unique to Chicago such as exploring the Art Institute, enjoying the Shedd Aquarium, and setting sail on a Tall Ship Windy boat. 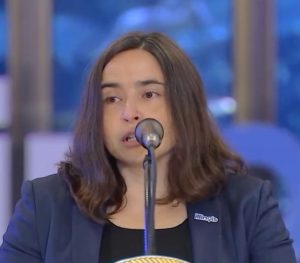 “Tourism is a key economic driver in Illinois and the ‘Middle of Everything’ campaign will help us welcome even more visitors to Illinois who will help support our distinctive small businesses, inviting hotels and world class restaurants around the state,” said DCEO Director Sylvia I. Garcia on Monday, April 18 in Chicago. (Illinois.gov)

“I loved every minute of working on this project promoting tourism in my home state and I’m so proud to finally see it come to life,” said Jane Lynch. “I am grateful for Gov. Pritzker’s enthusiasm and support for this new Illinois Tourism marketing campaign. We share the same passion for Illinois, its people, its culture, and the wonderful attractions across the state.

The $30.3 million campaign is a critical next step in the state’s efforts to accelerate the recovery of Illinois’ tourism and hospitality industry —a major contributor to the state’s economy, employing more than 600,000 people statewide prior to the pandemic.

“Illinois is full of amazing attractions and unique destinations — from top cultural institutions and world-class architecture to outdoor adventures and historic sites.  We can’t wait to share the wonders of Illinois with visitors from across the country and around the globe,” said DCEO Director Sylvia I. Garcia. “Tourism is a key economic driver in Illinois and the ‘Middle of Everything’ campaign will help us welcome even more visitors to Illinois who will help support our distinctive small businesses, inviting hotels and world class restaurants around the state.”

“The launch of the Illinois Middle of Everything tourism campaign will spark a renewed enthusiasm to attract visitors to all four corners of Illinois while helping to sustain and restore jobs in the state’s hospitality, travel, and tourism industries,” said Dave Herrell, chair of the Illinois Council of Convention & Visitor Bureaus (ICCVB) and president and CEO of Visit Quad Cities. “We are grateful to Governor Pritzker for his unwavering leadership and commitment to tourism and destinations throughout the state.”

“So many people don’t know about the beautiful scenery we have in Illinois, and this campaign is a great step forward in changing that,” said Sen. Dale Fowler (R-Harrisburg). “Between all of our beautiful state parks, the vast Shawnee National Forest, and our amazing lakes and rivers, I look forward to welcoming adventurers from across the country to Southern Illinois.”

The campaign featuring Lynch will also appear in local, regional, and national digital and print media, as well as highway billboards, bus signage, and wallscapes. This includes regional transportation hub takeovers in Atlanta and San Francisco, a digital billboard in Times Square, and other promotional activities amplifying the campaign during events such as the Chicago Pride Parade, the Enjoy Illinois 300 NASCAR Cup Series race at the World Wide Technology Raceway in Madison and more.

Born in Evergreen Park and raised in Dolton, Lynch graduated from Illinois State University in Bloomington, and spent 15 years in Chicago acting in the Steppenwolf Theatre Company and later The Second City comedy club.

For more information on trip ideas and itineraries and to download a guide of Jane Lynch’s “Favorite Places in Illinois,” visit: Enjoyillinois.com/Middleofeverything.