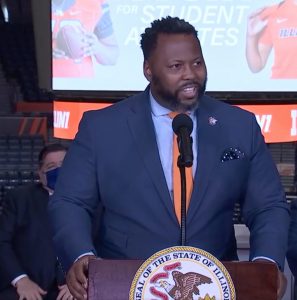 State Rep. Kambium Buckner, D-Chicago, sponsor of the bill allowing for some student-athlete compensation, speaks at the event at University of Illinois Champaign where Gov. J.B. Pritzker signed the legislation into law on Tuesday, June 29. (illinois.gov)

SPRINGFIELD – Lawmakers, collegiate athletes and athletic directors from some of the state’s most prominent universities on Tuesday, June 29 hailed the governor’s signing of a bill allowing college athletes to be paid for the use of their name and likeness as innovative and equity centric.

University of Illinois Athletic Director Josh Whitman called Gov. J.B. Pritzker’s signing of Senate Bill 2338 into law “the most dramatic, meaningful change to come to the collegiate model since the adoption of athletic scholarships.”

Athletic directors from Northwestern University and DePaul University were also present at the news conference June 29.

The new law, which takes effect July 1, allows Illinois college athletes to be paid for the use of their name, image or likeness, such as appearing at autograph signings at local businesses or appearing in advertising. It would also allow the athletes to hire an agent, but would not consider them employees of the schools they attend and would not allow them to be compensated for athletic performance.

Buckner, who played football at the University of Illinois, said the new law “is not just a win for the star quarterback or the star point guard.”

“This gives the women’s tennis player an opportunity to be compensated for teaching lessons back in her hometown during summer breaks,” he said. “This creates an apparatus for the women’s softball player to lend her image to the local pizzeria for fair market value.”

Eva Rubin, a women’s basketball player at the U of I, said college athletes pour hours into their school work and sports careers, but there are other partnerships that the new law can help facilitate. She pointed to her experience as a Type 1 diabetic and public outreach she has participated in for that cause. 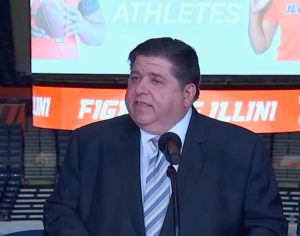 “With my small platform that I’ve been able to kind of build for myself here at the University of Illinois, I’ve had many opportunities to work with diabetes research foundations, the American Diabetes Association, just organizations and causes like that that are important to me,” she said. “So now with the (name, image and likeness law) being passed, I can only imagine the opportunities that I’ll be able to create for myself and build for myself in ways that that will help me give back to my community.”

Vederian Lowe, a lineman for U of I’s football team, said college athletes have “been dreaming of” the opportunity to reap financial benefits for the work they put into their sports. He called the bill a “historic change” for college athletics.

The new law will allow universities to prohibit a student from obtaining any sponsorships from wearing logos from certain brands during a competition. For example, if the university has a contract with Nike, it can prevent in-game Adidas sponsorships of individual athletes.

It prohibits endorsements for gambling, sports betting, controlled substances, marijuana, tobacco, alcohol, e-cigarettes, performance-enhancing supplements, adult entertainment, “or any other product or service that is reasonably considered to be inconsistent with the values or mission of a postsecondary educational institution.”

On Wednesday, June 30, the NCAA announced it was suspending restrictions on payments to athletes for sponsorship deals, online endorsements, personal appearances and similar compensations.  The rule would apply nationwide to approximately 460,000 student athletes. The rules would be in line with the new Illinois law.

Illinois joins 20 other states having passed such legislation, according to businessofcollegesports.com, although many of them have later effective dates.

Pritzker said the state’s bill puts it “at the forefront” of the movement to allow college athlete compensation.

“Beginning July 1, Illinois collegiate student athletes, no matter the sport and no matter the division, can take control of their destiny when it comes to their own name, image likeness and voice,” he said. “With this law, Illinois is at the forefront of taking some pressure off of talented kids who are torn between finishing their degree or cashing in on the big leagues.”

In a narrow decision, the U.S. Supreme ruled 9-0 last week that the NCAA cannot restrict education-related benefits to student athletes, such as laptops and paid internships. The ruling did not touch on athlete compensation.

“Obviously the college athletics landscape is changing, and I think that what we have proven here through this coalition is that we will always be willing and ready to be creative and to be a step ahead to lead the charge,” Buckner said. “We don’t know what everything will look like in the coming months and years, but I think what this signals is that we’re poised and ready to be at the vanguard and be at the front of the charge.”