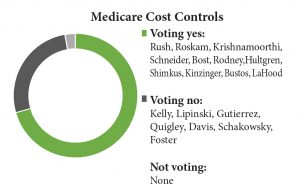 Medicare Cost Controls: The House on Nov. 2 voted, 307 for and 111 against, to abolish a panel of health experts from outside the government that was created by the Affordable Care Act to help control Medicare costs. The GOP-drafted bill (HR 849) would eliminate the 15-member Independent Payment Advisory Board, which is not yet in operation. The IPAB is empowered to propose cuts in payments to Medicare providers if they are needed to keep per-capita Medicare costs from exceeding projections. Congress would need supermajority votes by both chambers to override the panel’s recommendations. The board is barred from actions that would ration care, change Medicare co-payment or deductible levels or raise premiums levels.

Buddy Carter, R-Ga., said: “Medicare is too important to be left in the hands of unaccountable people” who would “take an axe to Medicare spending, adversely affecting untold numbers of vulnerable seniors….”

Louise Slaughter, D-N.Y., said the board “is about keeping Medicare spending in line, nothing more, nothing less.” 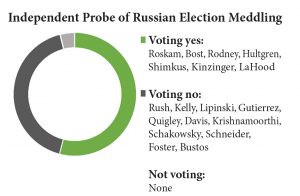 Independent Probe of Russian Election Meddling: Voting 230 for and 193 against, the House on Nov. 2 blocked a Democratic attempt to force floor debate on a bill (HR 356) now in committee that would establish an independent commission for investigating what U.S. intelligence agencies and the office of Special Counsel Robert Mueller say was Russian interference in the 2016 U.S. presidential campaign. Had Democrats prevailed on this vote during debate on H Res 600, they would have had an opportunity to bring the bill to the floor.

Louise Slaughter, D-N.Y., said: “Russia interfered with our 2016 election. That much is clear from Special Counsel Mueller’s investigation which led to indictments against two Trump campaign aides. The legitimacy of our electoral system is at stake, and it’s time for the Republican-controlled Congress to set aside the partisan politics and treat this threat with the gravity it deserves.”

No other member spoke on the issue.

A yes vote opposed floor debate on the Democratic-sponsored bill. 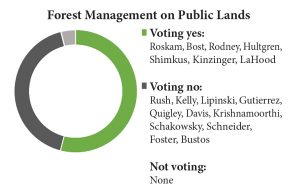 Forest Management on Public Lands: Voting 232 for and 188 against, the House on Nov. 1 passed a bill (HR 2936) that would ease environmental laws to allow commercial logging to be used more extensively to prevent wildfires on Bureau of Land Management and U.S. Forest Service land. Backers said that by waiving the National Environmental Policy Act and Endangered Species Act, the bill would enable timber companies to clear wider expanses of fire-damaged trees and diseased and combustible undergrowth. Foes of the bill said congressional budget cuts have depleted agency budgets for preventing and suppressing wildfires on federal land.

The bill also would exempt lawsuits challenging federal forest-management actions from the Equal Access to Justice Act. Under that law, the government is required to pay the attorneys’ fees and expenses of plaintiffs with relatively low net worth who prevail in litigation against U.S. agencies. The law has proved especially beneficial to environmental groups that successfully sue agencies over their land-management policies.

Tom McClintock, R-Calif., said the bill is needed because “our forests are now catastrophically overgrown, often carrying four times the number of trees that the land can support” and “easy prey for drought, disease, pestilence and fire.”

Jared Huffman, D-Calif., called the bill “an environmental wrecking ball that weakens standards and protections, limits public participation in the review of federal agency actions and won’t make our forests any healthier or safer.” 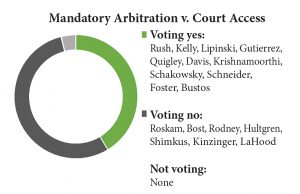 Mandatory Arbitration v. Court Access: Voting 189 for and 232 against, the House on Nov. 1 refused to strip HR 2936 (above) of a pilot program under which lawsuits filed against U.S. Forest Service policies would be resolved by mandatory arbitration rather than judicial proceedings in federal court. Arbitration typically is conducted by mediators under rules that limit discovery and prohibit meaningful appeals of the final ruling, which is binding on both sides.

Ro Khanna, D-Calif., said “judicial oversight and separation ofpowers is a core principle of our democracy” and “shielding an agency from review by independent federal courts could harmaccess to justice.”

A yes vote was to remove mandatory arbitration from the bill. 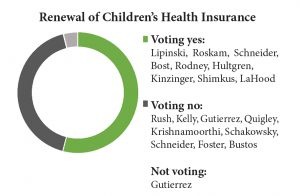 Renewal of Children’s Health Insurance: Voting 242 for and 174 against, the House on Nov. 3 passed a GOP-drafted bill (HR 3922) that would extend the Children’s Health Insurance Program (CHIP) through fiscal 2022 and other health programs including Community Health Centers through fiscal 2019. The bill’s 10-year, $18 billion cost would be paid for by offsets including cuts in Affordable Care Act preventive-care outlays and increases in Medicare premiums for the top 1 percent of taxpayers. Democrats said it was wrong for the bill to weaken the ACA and Medicare in order to finance health insurance for underprivileged children.

Now providing care to 9 million children, CHIP is a federally funded, state-run discretionary spending program designed mainly for families that are not poor enough to qualify for Medicaid, but which cannot afford adequate private health insurance for their children.

Bradley Byrne, R-Ala., said: “We should not let petty political arguments keep us from ensuring that children have access to affordable health insurance, keeping the doors open at community health centers or allowing Alabama’s hospitals to continue serving communities in need.”

Frank Pallone, D-N.J., said Republicans, having failed to repeal the Affordable Care Act, “are now using the reauthorization of CHIP and Community Health Centers as a way to once again sabotage the ACA. Make no mistake, if Republicans can’t repeal the ACA outright, they’ll cripple it any time they can.” 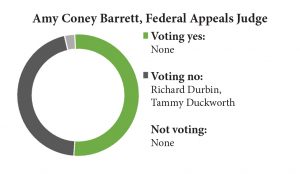 Amy Coney Barrett, Federal Appeals Judge: Voting 55 for and 43 against, the Senate on Oct. 31 confirmed University of Notre Dame law professor Amy Coney Barrett, 45, for a judgeship on the 7th Circuit U.S. Court of Appeals. Republicans praised Barrett as a distinguished professor whose rulings will stay within the bounds of settled law. Democrats said she is an academic without judicial experience and criticized her conservative views on LGBT and women’s reproductive rights.

Majority Leader Mitch McConnell, R-Ky., said Barrett’s writings and testimony “clearly show a nominee who will uphold our Constitution and our nation’s laws as they are written, not as she wishes they were.”

Richard Durbin, D-Ill., said the nominee “has no judicial experience….She could only recall three litigation matters that she worked on in her entire career — three. She has never served as a counsel of record in an appellate case or ever argued an appeal.”

A yes vote was to confirm the nominee.