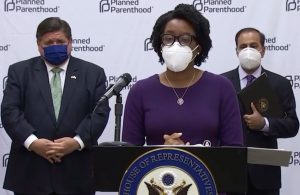 Illinois Gov. J.B. Pritzker is joining with some Illinois Congressional Democrats in calling for federal legislation to protect women’s reproductive rights including abortion.

The push is a reaction to Texas’ restrictive abortion law that went into effect earlier this month.

Pritzker and three U.S. representatives appeared at a Planned Parenthood in Aurora on Sept. 14 — where they were met anti-abortion demonstrators outside — and came out in support of the Women’s Health Protection Act that is being proposed in the U.S. House.

Illinois Congresswoman Lauren Underwood, D-Naperville, a co-sponsor of the bill and was one of the representatives joining Pritzker in Aurora.  Representatives Bill Foster and Raja Krishnamoorthi were also present.

The Women’s Health Protection Act “will protect the freedom to make personal decisions about reproductive healthcare from politicians who wish to control it, so that nobody is denied access to basic healthcare just because of the state that they live in,” said Underwood.

Illinois in 2019 passed a law that protected a women’s right to choose in the state should the Supreme Court overturn Roe v. Wade and leave it up to individual states to set their own laws on abortion.

“The latest extremist attacks on reproductive health prove we need a federal law to protect a woman’s right to control their own healthcare.  Because not all states are like Illinois where it’s law. Here’s the most important thing about abortion: if you need one, if you want one, you shouldn’t have to turn to horrific, obstructive, or expensive methods to be able to get it – period,” Pritzker said.” I will never stop fighting for the rights of Illinoisans to access the healthcare they deserve.”

Jennifer Welch, president and CEO of Planned Parenthood of Illinois, was in attendance at the Aurora event, and said “It’s not just abortion laws that are in danger. When laws target abortion providers like Planned Parenthood, it decreases access to other essential and life-saving care such as cancer screenings, STI testing and treatment, gender affirming hormone therapy and other sexual and reproductive healthcare.”