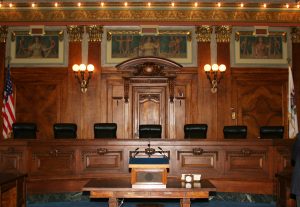 SPRINGFIELD — The Illinois Supreme Court has announced that it approved a change to rules governing eviction proceedings that will simplify the process for both landlords and tenants.

The rule change mandates that property owners must file all related documents simultaneously when they file a complaint. That includes pertinent portions of a lease, a copy of the eviction issued by a landlord and proof the tenant received that document.

Property owners must now also prove their right to remove residents from the beginning of the proceeding, giving tenants the exact reason for an eviction, according to the rule.

“This new rule will help self-represented parties on both sides of eviction cases and also the judges hearing these cases by requiring key information at the outset,” Chief Justice Anne Burke said in a statement.

The Supreme Court also approved a standardized form for property owners to use in place of a notice, which explains the basis for an eviction.

According to a news release from the court, the rules are also meant to streamline such proceedings.

Tenants defending themselves will be better prepared for a court hearing and attorneys can more easily evaluate cases, the Supreme Court said.

According to a document presented to the court’s Rules Committee, notices a landlord is terminating a lease, which are “always a prerequisite” to filing an official court complaint, “generally” are not given to the court.

“The new rule is intended to crystalize the law, practices, and procedures in eviction courts,” according to a news release issued Friday.

Members of court committees began working on the rule change “long before” the novel coronavirus pandemic, a spokesperson said. It applies to all eviction cases filed on or after July 1.

Gov. J.B. Pritzker’s moratorium on evictions during the current public health emergency are still in place until July 26, at which time his latest disaster proclamation will expire. He announced in June that he plans to extend that deadline through the month’s end.

A state grant program will begin in August to help those behind on rent payments.

The Illinois Supreme Court officially denied a request by several graduates, state law school professors and faculty and others to grant this year’s class a license to practice based on other benchmarks, including their juris doctor degree.

Students were already given a temporary license to work under attorneys with full permissions because, Chief Justice Anne Burke said in a statement, “the court understands the plight of recent law graduates and we want to provide an effective transition to them becoming practicing lawyers in these unprecedented times.”

The annual bar exam was pushed from July 28 and 29 to Sept. 9 and 10. Now, according to the Illinois Board of Admissions to the Bar, state officials “will have no choice but to cancel” the test if certain criteria set by Gov. J.B. Pritzker to monitor the novel coronavirus’ spread are met.

In a statement, those who filed a petition to eliminate the need for an exam said issuing that test “would be devastatingly inequitable to applicants, and any form of in-person exam would be unsafe.”

Guidance issued by the bar admissions board specifies potential test takers must disclose health information prior to arriving at the test site, receive a temperature check and bring hand sanitizer, among other measures.

States including New Jersey, Nevada, Michigan, Indiana and California announced they would administer online exams. New York and Louisiana, among others, outright canceled the test.

If held in September, exam sites in Illinois are in Chicago, Rosemont, DeKalb, Champaign and Carbondale. About 2,000 people take the test each year.