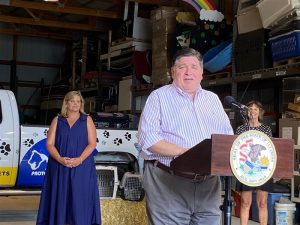 SPRINGFIELD – In a series of downstate news conferences coinciding with the Illinois State Fair, Gov. J.B. Pritzker this week gave an update on the possibility of a special session, outlined new state infrastructure investments and announced a new program for some Illinoisans over age 55.

While the governor quickly announced he would call a special session after the landmark Supreme Court case Roe vs. Wade was overturned in June, lawmakers have thus far not scheduled any return to the Capitol.

Last week, Pritzker wasn’t any clearer as to when he expected lawmakers to return to address issues such as abortion rights and gun violence.

“As you know, the working groups are hard at work in the House of Representatives, working on various aspects of legislation, working with advocates, listening to them,” he said. “And so we’re cautiously optimistic that they’ll be able to come up with ideas for us to be able to bring forward in a special session, or in veto session, or some of it may even be in the new year.”

On Tuesday, Pritzker was asked about session again, noting he was in favor of banning high-capacity magazines and assault-style weapons like the ones used in the Highland Park July 4 shooting.

“So the question is, can they come up with a compromise or bills that will meet my requirements that could get done before the new session, and that’s what I’m looking for,” he said.

Mainstreet improvements: In his latest celebration of state infrastructure funding, Pritzker stopped in Alton Monday to highlight a $106 million state investment in revitalization of main streets across Illinois. It will be met by $109 million in other matching funds, for a total investment of $215 million.

The state was able to double its initial planned $50 million investments in the program to $106 million due to funding made available through the federal American Rescue Plan Act, according to the governor’s office.

The grants will be made through the state’s Department of Commerce and Economic Opportunity in more than 50 communities with a maximum allotment of $3 million.

In Alton, that includes $3 million for the renovation of downtown space for a business incubator. In Rantoul in Champaign County, it included $3 million for downtown improvements, infrastructure upgrades and implementation of a master plan.

Over $2 million will go to Carbondale for downtown arts and entertainment district improvements, while Carrollton, in Greene County, will see $1.9 million for courthouse improvements.

The funding for Rebuild Illinois’ building infrastructure component comes from an expansion of gambling in the state, as well as an increase to cigarette taxes and parking taxes. Those measures have all been in place since 2019.

A full list of downtown revitalization projects is available here.

The Southwestern Illinois Justice and Workforce Development Campus will be located at a site which once housed Lindenwood University’s undergraduate program.

The city of Belleville purchased the building through a $3 million DCEO grant, and SWIC was allocated $5.9 million from the Illinois Community College Board to operate the facility.

Beginning in the fall of 2022, according to the governor’s office, SWIC will launch a new police training academy at the site. It will host 125 to 130 cadets in the inaugural class, and the site could host more SWIC criminal justice programs in the future.

PACE program: On Senior Day at the fair Monday, Pritzker and representatives from the Illinois Department of Human Services announced the state’s participation in a Medicare- and Medicaid-funded program aimed at giving Illinoisans aged 55 and older in certain communities an alternative to nursing home care.

The Program of All-Inclusive Care for the Elderly, or PACE, will be available to Illinoisans age 55 and older who qualify for Medicaid and Medicare in West Chicago, South Chicago, Southern Cook County, Peoria and East St. Louis.

The program provides coordinated medical care and social services to adults who fit those categories and qualify for nursing home care but can safely live at home.

It’s a federal program that Illinois tried to participate in in the 1990s, IDHS Director Theresa Eagleson said, but participation was minimal. Pritzker said 31 states already have such programs in place.

“Seniors who enroll in PACE will receive interdisciplinary and comprehensive services right in their communities right at home,” Pritzker said. “That’s everything from home and personal care to individualize specialty medical care and diagnostic services.”

The governor’s office said the programs are expected to be up and running in Fiscal Year 2024, which begins in July 2023. The funding comes from a redistribution of existing resources within the state’s managed care program.