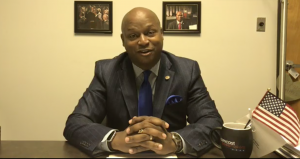 Two Illinois House bills are taking on President Donald Trump’s threats to give immigration agents more power to round up undocumented immigrants in Illinois. Meanwhile, government lawyers for the Immigration and Customs Enforcement agency are appealing a federal judge’s ruling that local law enforcement agencies in Illinois and other Midwestern states do not need to turn over suspected persons with unclear citizen status to ICE without a warrant.

The proposed “Immigration Safe Zones Act” (HB0426) sponsored by State Rep. Emanuel “Chris” Welch (D-Hillside) provides that schools, hospitals and churches are not required to comply with “detainer” requests from ICE without a criminal warrant. The bill also says that “safe zone” space employees do not have to turn over registries or information about patients, clients or students to local law enforcement officials known to be working with ICE, without a warrant. (View State Rep. Chris Welch town hall)

“This is very different from a sanctuary city bill,” Welch said. “This bill creates safe places for people to exist without the fear of deportation in schools, hospitals, clinics, nursing homes and places of worship. People shouldn’t be in those places and be afraid that federal agents would bust in and deport them.”

Chicago Public Schools are already pushing back against the possibility of ICE raids. CPS announced Feb.22 that ICE agents were not welcome in CPS buildings without a warrant and permission from the administration and law department.

“To be very clear, CPS does not provide assistance to U.S. Immigration and Customs Enforcement (ICE) in the enforcement of federal civil immigration law,” said Chicago Chief Education Officer Janice Jackson in a CPS memo. “Therefore, ICE should not be permitted access to CPS facilities or personnel except in the rare instance in which we are provided with a criminal warrant.”

Welch’s bill passed out of the Human Services Committee Feb. 9 on a party-line vote of seven Democrats “for” and for Republicans “against.” Welch said the bill’s language has been amended to “listen to the concerns of Republicans to hopefully get more support.” The bill may be on the floor for a vote the first week of March, Welch said. “Then we’re hoping it will pass in the Senate and get onto the Governor’s desk.”

Even in spite of President Donald Trump’s executive order denying federal funds to “sanctuary cities” Welch, an attorney, said, “lawyers do not believe [the bill] places institutions in jeopardy of losing funding.”

The Illinois Trust Act (HB3099), sponsored by Elizabeth Hernandez (D-Cicero), says no law enforcement agency can detain a person eligible to be released from custody solely on the basis of an immigration detainer from ICE or an administrative warrant.  Hernandez’s bill, proposed Feb. 9, has not left committee yet, and may not advance at all.

Local law enforcement cooperating with ICE is already under scrutiny because of a Nov., 2015 ruling in a Northern Illinois District class-action lawsuit.

Judge John Z. Lee ruled that without a criminal warrant, ICE agents had no expectation that local law enforcement agencies should hold on “detainers” persons in custody, charged but not convicted of a crime. Plaintiffs Jose Jimenez Moreno, a U.S. citizen of Illinois, and Maria Jose Lopez, a lawful permanent resident in Florida, along with two others, sued the federal government in 2014 for illegally holding them in custody on Department of Homeland Security “retainers” and beginning deportation proceedings.

Judge Lee ruled ICE’s practice of issuing immigration detainers without warrants overstepped their authority. Lee ruled that all law enforcement agencies in Illinois, Wisconsin, Indiana, Missouri, Kentucky and Kansas be advised that they were not permitted to hold persons with questioned immigration status who would otherwise be released from custody. Federal lawyers for ICE are appealing the ruling.

Dept. of Homeland Security Director John Kelly released a memo Feb. 20 saying that ICE would be cracking down on more categories of immigrants suspected of having illegal citizen status. The memo announces new enforcement priorities including immigrants charged — but not convicted — of a crime and immigrants who have “committed a criminal offense” but have not been charged. The order also prioritizes deportation for illegal immigrants who have given false information to the government or sought to defraud public benefits agencies. The new enforcement memo also says ICE may take into custody anyone who “in the judgment of an immigration officer, poses a risk to public safety or national security.” The memo also seeks to expand deputizing local law enforcement officers as immigration police.

In the face of these events, Welch said his bill would signal that Illinois does not agree with expanding ICE raids.

“I think this is good policy. Having these safe zones will show to the rest of Illinois and the rest of the country that Illinois is a welcoming state,” Welch said in a Feb. 22 Facebook “town hall” broadcast.  “We want people to come here and feel safe. Instead of people fleeing our state, this is something we can do to help people come back to our state because we’re sending a signal that Illinois is a welcoming place to go to school, to go to church, to go to a hospital and take care of yourself.”