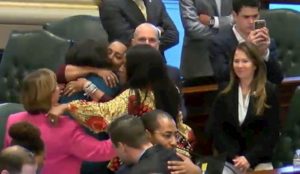 Supporters of a bill to legalize adult recreational marijuana in Illinois embrace on the House floor Friday at the Capitol in Springfield after the bill passed on a 66-to-47 vote, sending it to Gov. J.B. Pritzker for his signature. (Photo courtesy of Blueroomstream.com)

SPRINGFIELD – The Illinois House on Friday, May 31 passed a bill legalizing adult recreational marijuana in the state.

The 66-to-47 vote sends House Bill 1438 to Gov. J.B. Pritzker who campaigned in 2018 on a platform that included legalizing marijuana. The Senate approved the bill on Wednesday, 38-17.

“The state of Illinois just made history, legalizing adult-use cannabis with the most equity-centric approach in the nation,” Pritzker said in a statement released after the vote. “This will have a transformational impact on our state, creating opportunity in the communities that need it most and giving so many a second chance. In the interest of equity and criminal justice reform, I look forward to signing this monumental legislation.”

The May 31 vote, however, came after a marathon debate that lasted nearly four hours, leaving lawmakers with less than 10 hours to complete the rest of their business for the session. That forced leaders to announce the House would continue meeting over the weekend.

With passage of the marijuana bill, Illinois is poised to become the 10th state in the nation to legalize its use by adults for recreational purposes. But it would be the first to do so by a comprehensive statute enacted by the legislature rather than through a ballot initiative.

Vermont legalized marijuana through legislation in 2018, but that law covered only personal use and cultivation. It did not include retail sales. 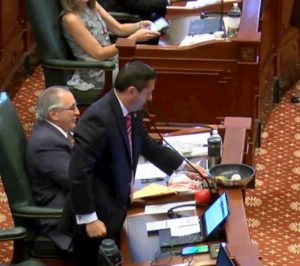 Democratic Rep. Anthony DeLuca, of Chicago Heights, re-enacts a 1980s-era anti-drug ad on the floor of the House on Friday, putting an egg in a frying pan and saying “This is your brain on drugs,” during debate of a bill to legalize adult recreational marijuana in Illinois. (Photo courtesy of Blueroomstream.com.)

The Illinois bill would provide for licensing and regulation of marijuana cultivators, processors, transporters and sellers. It also allows Illinois residents over age 21 to possess up to 30 grams, or roughly one ounce of marijuana for personal use, and it allows people certified to use marijuana for medical purposes to grow up to five plants in their own homes.

Sales and possession would become legal under state law on Jan. 1, 2020, although marijuana is still illegal under federal law.

The bill also sets out a schedule of licensing fees and excise taxes that Rep. Kelly Cassidy, D-Chicago, said is expected to generate $58 million in the upcoming fiscal year, and as much as $500 million a year when the industry is fully mature.

“This is the beginning of the end of the war on drugs,” Cassidy said on the House floor just before the final vote.

Indeed, many supporters of legalization said their primary goal was to correct the inequities and social harms they say the war on drugs has had on black and Latino communities, who they argued have been disproportionately targeted for enforcement and incarceration for drug violations.

The bill would provide a mechanism under which hundreds of thousands of Illinois residents could have criminal records for minor marijuana-related offenses expunged.

It also would direct a significant share of the revenues generated into community reinvestment programs for communities that have been disproportionately impacted by drug enforcement policies.

“We have been able to craft a policy that reinvests money in communities that have been divested in for the last 80 years,” said Rep. Jenhan Gordon-Booth, D-Peoria.

The bill also does nothing to change the state’s medical marijuana program. In fact, people who hold licenses to operate medical marijuana dispensaries will have the first opportunity to obtain a second license for a recreational dispensary so retail sales can begin Jan 1.

Chris Stone, CEO of Ascend Wellness/HCI Alternatives, which operates medical dispensaries in Springfield and Collinsville, issued a statement after the vote saying that company would continue operating those outlets, adding: “We are excited for the future and look forward to serving even more people in the years to come.”

Critics of the bill, however, warned about the public health and criminal justice effects that they said legalization would have.

“Correlation does not prove causation,” he said. “However, there is sufficient evidence for us to show that there is a connection between the use, particularly heavy use of marijuana and the increase in violence.”