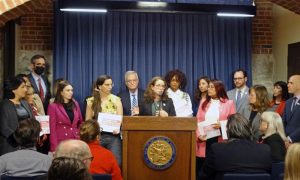 House Democrats passed House Bill 1464, which prevents the Illinois Department of Financial and Professional Regulation from being able to revoke, suspend, or take any other disciplinary action against licensed physicians, nurses, and advanced practice nurses for providing any medical service related to an abortion.

Illinois law already protects the right to an abortion as health care, but the bill is aimed at protecting health care providers who practice in multiple states.

“We have spoken here in Illinois, now is not the time to be punishing health care workers for doing their jobs and serving their patients,” Hirschaurer said.

The Supreme Court is expected to release a decision as early as this summer arising from a Mississippi abortion case that challenges the 1973 Supreme Court decision in Roe v. Wade. The Mississippi law prohibits an abortion after 15 weeks but makes exceptions in cases when the fetus has a severe abnormality that is “incompatible with life” or when the pregnancy threatens the woman’s life.

Brigid Leahy, vice-president of public policy at Planned Parenthood Illinois, said if the Supreme Court ignores a half century of precedent and overturns Roe v. Wade, it will become more difficult for people outside of the state to access a full range of care they need. 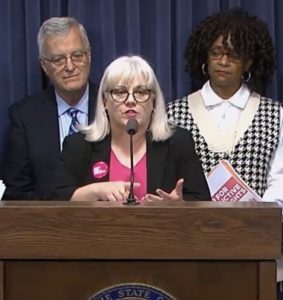 “If Roe falls, every single state that borders Illinois will quickly move to either outright ban or severely restrict abortion,” Leahy said.

Illinois has 17 Planned Parenthood health care centers that provide access to health care information and services for males and females.

Leahy noted that people from other states have already begun to turn to Illinois for reproductive health care access and Planned Parenthood facilities could see at least double the number of out-of-state patients if Roe v. Wade is overturned.

Recently, Leahy said that Illinois Planned Parenthood worked with a patient from Mississippi who did not know how they were going to pay for transportation, lodging and meals, as well as the cost of an abortion until a Planned Parenthood team set up accommodations.

“I urge everyone to remember that not one pregnant person should have to travel out of their state to get the care that they need.” Leahy said.

In a follow-up interview, Leahy said that Planned Parenthood has been planning to help with an influx of patients needing to travel to Illinois for reproductive health care access.

She said they have been working on a fundraising campaign to help expand capacity for care, have upgraded the health center located in the Chicago Loop, and have been coordinating with other Planned Parenthood providers, affiliates and local abortion funds.

In January, a regional logistics center opened in a Planned Parenthood clinic in Fairview Heights that uses private funds to pay for travel and lodging arrangements. The center is operated by Planned Parenthood and the Granite City-based Hope Clinic for Women.

There is no income or distance requirement to access services from the center, but patients must schedule an appointment with the clinic before reaching out for logistical support.

House resolutions are non-binding and do not need approval from the Senate or a signature from the governor.