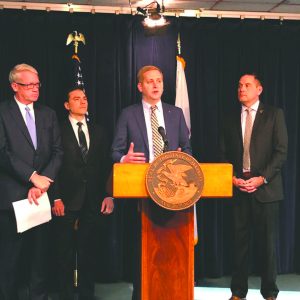 SPRINGFIELD — Illinois House Republicans unveiled another package of proposed ethics reforms Thursday that they say are prompted by the wide-ranging federal probe into alleged corruption by some high-profile Chicago-area Democrats.

Speaking at a news conference in Chicago, Minority Leader Jim Durkin, of Western Springs, said the reforms are needed to restore public trust in Illinois state government and he challenged Democrats, who control both chambers of the General Assembly with supermajorities, to act on the proposals when lawmakers return to the Statehouse for the last three days of the veto session Nov. 12-14.

“Illinois government has sunk to an even lower low,” Durkin said. “A crisis of confidence has never been more profound.”

The GOP package includes House Bill 3954, which would require lawmakers to disclose more of their personal financial information on their statements of economic interest.

It also includes a proposed constitutional amendment, HJRCA 36, which would change the way vacancies are filled in the General Assembly by requiring special elections. Currently those vacancies are filled by party officials from the precincts within the legislative district.

Deputy Minority Leader Tom Demmer, of Dixon, said that proposal is a direct response to the recent resignation of former Rep. Luis Arroyo, a Chicago Democrat, who was arrested in October and charged with trying to bribe a state senator who was also working as a confidential FBI informant.

Arroyo, as a Democratic committeeman for the 36th Ward, would be part of the process of selecting his replacement.

“Today we have a situation where former Representative Arroyo recently resigned amid federal corruption charges, only to then be still a part of the selection process to choose a successor for the seat from which he just resigned,” Demmer said.

House Republicans have also introduced a resolution, House Resolution 588, which would enable a chief co-sponsor of any bill that has at least five co-sponsors from each party to call for an up-or-down vote on that bill in a substantive committee.

Demmer said that bill is a response to Sen. Martin Sandoval, the former chairman of the Senate Transportation Committee who stepped aside from that post after federal agents executed search warrants at his district and Statehouse offices as well as his home.

Demmer said Sandoval was known for bottling up bills in that committee, even when they had broad bipartisan support. 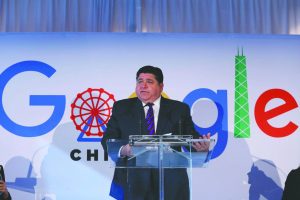 Gov. J.B. Pritzker speaks Thursday during an event commemorating Google opening its second office in Chicago. The governor renewed his calls for comprehensive ethics reform but said it is unlikely that lawmakers will have time to pass it during the last three days of the fall veto session. (@GovPritzker on Twitter photo)

Republicans also are proposing House Bill 3947, which would ban members of the General Assembly, their spouses, and immediate live-in family members from working as lobbyists paid to influence local units of government.

Finally, Republicans are offering House Bill 3955 to create publicly available documentation of any communication a lawmaker has with any state agency regarding the awarding of a contract.

Sandoval is reported to have intervened with the Illinois Department of Transportation on behalf of a company that provides automated red light cameras for cities and villages in the Chicago area, a company that also has made substantial contributions to Sandoval’s campaigns.

Speaking at a separate and unrelated event in Chicago Thursday, Democratic Gov. J.B. Pritzker did not speak directly to the Republicans’ proposed package. He did, however, renew his call for comprehensive ethics reform, including more disclosure by lobbyists, while saying he thinks it is unlikely that lawmakers will be able to pass very much legislation next week.

“We’ve seen that Representative Arroyo was a lobbyist for other levels of government,” Pritzker said. “I think that is challenging and problematic, but once again, I’m not sure we’ll be able to do the proper amount of investigation and hearings in the three legislative days that are left this year. But that doesn’t mean we shouldn’t aim at getting the best and most comprehensive ethics package through that we can.”