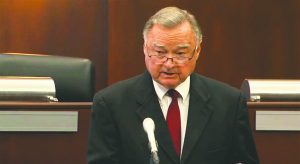 Illinois Supreme Court Chief Justice Lloyd Karmeier speaks Oct. 2 in Chicago during the unveiling of the Judicial Conference’s strategic agenda for the state’s courts. Karmeier, whose term as the leader of the state’s highest court will end later this month, called the plan a “blueprint for the future.” It includes a mission statement, vision edict and five core values. (BlueRoomStream)

SPRINGFIELD — A panel of Illinois judiciary members and stakeholders developed a three-year plan, announced Oct. 2 during an event in Chicago, designed to “improve the delivery of justice and better serve the public.”

In what Supreme Court Chief Justice Lloyd Karmeier called the “most significant step forward” his branch of government has undergone since the amendment creating a unified court system in the state, the guide outlines a mission statement, vision edict and five core values meant to be its “blueprint for the future.”

“If the courts are to continue to make good on the promise of equal justice under law in this new and challenging environment, we must be proactive. Waiting for problems to develop and then responding will no longer do,” Karmeier wrote in the document. “Rather, it is critical that we anticipate the difficulties ahead and prepare for them in a reasoned and coordinated way, drawing on the insights and experience of every part, every level and every region of the Judicial Branch.”

Issues affecting the judiciary include the appropriation and use of “limited resources,” changing technology and data collection, Marcia Meis, director of the courts’ administrative office, said.

The Judicial Conference crafted the Strategic Agenda’s five goals to address those difficulties, holding in mind the vision statement it created as well: “To be trusted and open to all by being fair, innovative, diverse, and responsive to changing needs.” 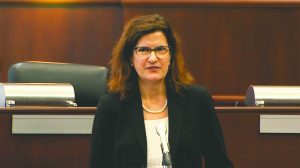 Marcia Meis, director of the courts’ administrative office, said Oct. 2 that limited resources, changing technology and data collection are issues that have been affecting the state’s judicial system. (BlueRoomStream)

The panel of 29 conference members — 15 judges from varying levels and geographic areas and 14 non-judicial members — “did not reinvent the wheel,” retired judge S. Gene Schwarm said. Instead, they focused on five states similar to Illinois that have a comparable plan in place.

To help create them, the conference hired Brenda Wagenknecht-Ivey from Praxis Consulting, Inc., whose services were recommended by some of those other states, Schwarm said. Her services were paid, in part, through a State Justice Institute grant.

“Having identified those goals, it falls to us to see them through,” Karmeier said.

Fifteen specific initiatives will be implemented in the next year, undertaken by the Supreme Court’s commissions and committees. Also,l seven task forces will be created to accomplish what those groups are not assigned to carry out.

Meis said information will be shared not only within the judicial branch, but with community leaders and members of the Legislature to create a “feedback loop.”

“In this way we ensure the process is inclusive, effective and sustainable,” she said.

Justice Anne Burke is the other member of Illinois’ highest court on the conference because, a spokesperson confirmed, the plan will last three years — the length of her term as chief justice, which is set to begin at the end of October.

Karmeier’s own term will end then as well. He thanked members of the conference Oct. 2 for their work putting the Strategic Agenda together.

“I hardly have words to express what I feel in my heart,” said Karmeier, who was also celebrating his 54th wedding anniversary Oct. 2.