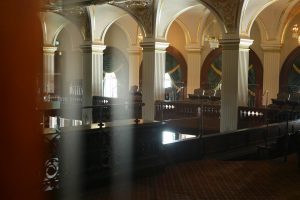 The Illinois House of Representatives chamber at the Capitol in Springfield sits empty April 2. The General Assembly has not been in session since March 5 because of the COVID-19 pandemic. (Photo by Ben Orner/Capitol News Illinois)

SPRINGFIELD – State Rep. Martin Moylan and his staff thought they were ahead of COVID-19.

Shortly after Illinois saw its first two cases of novel coronavirus disease in late January, the Democrat from Des Plaines filed House Bill 5607. The bill would have authorized a study to examine if the state departments of public health and emergency management were prepared for COVID-19.

“We wanted to get everybody in the state aware of what was going on,” Moylan said.

However, as has been a theme of this growing pandemic, COVID-19 did not care about the schedule of the state Legislature. By the time Moylan’s preparedness study bill was assigned to a substantive committee on March 17, 160 people in Illinois had contracted the virus, one had died, and Gov. J.B. Pritzker had already ordered schools and nonessential businesses closed.

“Nobody had the foresight to see how bad it really was,” Moylan said.

Now, instead of preparing for the effects of COVID-19, Moylan and other state lawmakers are living them. For Moylan, a 69-year-old with asthma who lives in a hot spot for coronavirus cases, life has become a “balancing act” of taking care of constituents and also taking care of his health.

“I’m very active in the community. I ride my bike all over, I talk to people. That stopped,” he said.

Moylan said he now drives around his district once every day, and when he stops to talk with people, he said he rolls down his window instead of getting out.

“We’re concerned about catching it and actually dying,” he said of himself and his fellow legislators over 50 years old.

“Some are doing home projects, another one won’t go out of the house,” Moylan added. “He’s got same issues I got. He says there’s no way he’s going back to Springfield. He’s ‘not going to die,’ he says.”

Moylan said his entire staff is working remotely, trying to help constituents with their dilemmas, from a routine fallen tree to applying for unemployment during an economic collapse.

“It’s the same gambit, but there are additional problems that are like being affected because people are out of work, kids aren’t in school,” he said.

“We’re a middle-class community that has a lot of working people that work in service jobs,” he added. “So naturally, they’re suffering, and they don’t know what the future is.”

The reality of COVID-19 has not just thrown curveballs to Chicago area lawmakers, but to downstate districts as well.

“I really miss a lot of the interaction with the people,” said state Rep. Dan Swanson, a Republican from the small western Illinois town of Alpha.

The usual gatherings in his five-county rural district, like FFA banquets and school events, have ceased because of social distancing guidelines and mandatory school closures.

“But through phone calls and messaging and email we try and stay on top of the top issues,” such as unemployment and help for small businesses, Swanson said of his staff working remotely.

Small-town main streets throughout rural Illinois, Swanson said, have especially borne the economic impacts of people staying in their homes.

“The small businesses, the beauty shops or whatever you want to call them, places like that have really been hit the hardest,” he said. “Not getting that noon day or evening crowd at the local bar and grill type thing has been pretty different.”

College towns, which rely heavily on the economic boost of university students during the spring semester, have also suffered.

“My office is located in uptown Normal, where normally it is the hustle and bustle of Illinois State University,” said Rep. Dan Brady, “and it’s basically a ghost town.”

The central Illinois Republican said that since Pritzker issued the stay-at-home order two weeks ago, he has heard the concerns of “scared” restaurant, bar and retail owners.

“The springtime would represent so many things for them in their shops with events with sororities and mom’s day,” he said, but during the COVID-19 pandemic, that “is not the case and won’t be the case this spring.”

Brady said his district office is still open, as he and his staff often work late into the evening to assist each individual constituent.

COVID-19 has “put me in a position of becoming an informational officer that I’ve never been before,” he added.

Though the fast-moving COVID-19 pandemic squashed any chance of a preparedness study, Moylan has nothing but praise for how Pritzker and state health leaders have responded.

“The governor is doing a great job of how he’s handling it,” Moylan said.

Brady, who serves as the deputy Republican leader in the House, applauded Pritzker for his communication and decision-making.

“I think the governor’s making very difficult decisions and doing that with the best interests of the people that he represents at heart, and listening to those in the different medical fields and professional fields to help him,” Brady said.

Though Swanson said he is reserving criticism of the governor because he does not have access to the same data and information that Pritzker does, he is “frustrated” by the closing of state parks.

“People have called saying, ‘Why can’t I go fishing at the state park, or why can’t I go golfing?’ Those are the ones that are kind of hard to explain,” he said. “When dads and kids are home right now, it’d be a great time to do a little bonding around the fishing hole or going golfing or something like that.”

Lawmakers have not been at the Capitol since March 5 after three straight weeks of session were canceled by leadership. Though the official legislative calendar lists the House and Senate on a prescheduled recess until April 21, Moylan said lawmakers are “on call” to return at any time.

Swanson, like many legislators, said he does not have a “crystal ball” to determine when legislators will return, but with the stay-at-home order running through the end of April, “I’d say that probably means us too.”

“It’s hard to do, there are 177 members of the General Assembly and we’re asking people to stay home and not congregate in groups of more than 10,” he said. “Some governors might think this is a dream, that you can’t get your legislature together, but we have things that we need to get done in the state of Illinois.”

Of the things that need to get done, Brady said the top priority will likely be the budget, which the Illinois Constitution requires be in place by the end of June.

“I can’t think that with the priority of things, that it won’t be everything focused on budget, trying to have some framework of a budget and what we can do with what will be the lack of revenues, the like we sure haven’t seen before.”

Pritzker, who proposed a $42 billion budget, is also aware of the impending revenue crater.

“I don’t think I could list all the changes that would need to be made to the original budget,” he said.

And although estimating the exact revenue shortfall is “very difficult” right now, Pritzker said, “It will be a vastly different budget. There’s no doubt about that.”

An eventual return to the Capitol, though, does not necessarily mean a return to normalcy. Even the nation’s top public health experts have found it hard to predict when this crisis will end or when its economic consequences will begin to subside.

For Swanson, he likens it to the first day planes were flying after the Sept. 11 terrorist attacks.

“It wasn’t for several days you finally heard that first airplane that kind of brought you back to normalcy,” he said. “I think when we see that first local restaurant, that bar and grill or whatever open up, then we’ll see that we’re back to a kind of normalcy again.”