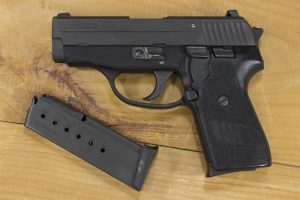 Those rules were adopted on an emergency basis in January, nearly one year after Democratic Gov. J.B. Pritzker signed the Firearms Dealer License Certification Act into law. It requires that anyone holding a federal firearms license who engages in the business of selling or transferring firearms also obtain a state certificate and subject themselves to state regulation.

ISP initially proposed rules to implement that law in August, but the draft rules ran into stiff opposition from gun store owners who said those rules — including requirements for video surveillance and the storage of guns and ammunition — would be impossible to comply with and would put many gun stores out of business.

The agency then began rewriting the proposed rules and in December submitted new rules on an emergency basis. That means they are allowed to remain in place for up to 150 days, during which time the agency must resubmit proposed new permanent rules that could be subject to public hearings and public comment.

During a Feb. 18 meeting of the Joint Committee on Administrative Rules, or JCAR, a 12-member legislative panel that has oversight authority over the rulemaking process, Sen. Paul Schimpf, R-Waterloo, and Rep. Steven Reick, R-Woodstock, offered a motion to suspend the rules, arguing that “agency-created emergencies do not constitute an appropriate use of emergency rule.”

Although the motion appeared to receive support from a majority of those voting, it fell short of the two-thirds majority, or eight votes, required by law for JCAR to block administrative rules.