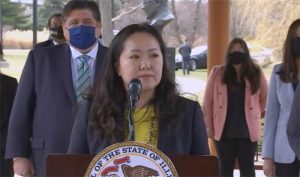 Rep. Janet Yang Rohr, a Democrat from Naperville, speaks at a news conference with Gov. J.B. Pritzker and other members of the General Assembly’s Asian American Caucus in the aftermath of a gunman killing eight people last week in Atlanta, including six women of Asian descent. (Blueroomstream.com)

SPRINGFIELD — Less than a week after a deadly attack on Asian Americans in Atlanta, Gov. J.B. Pritzker and members of the General Assembly’s Asian American Caucus spoke out against the murders and against discrimination generally toward the Asian American community.

“I do not pretend to know the pain of this moment, for those who look at the Atlanta victims and see their own mothers, daughters and sisters, or themselves,” Pritzker said at a news conference Monday, March 22 in the Chinatown neighborhood in Chicago. “But I want the (Asian American Pacific Islander) community in Illinois to know that I see you, and I see the fear and anxiety that these events have forced into your lives and the lives of your loved ones, and I want you to know that Illinois is your home. You are our friends and our neighbors and our family members, and I will do everything in my power as governor to protect you and to welcome you.”

Pritzker was accompanied by members of the Asian American Caucus, including Democratic Reps. Theresa Mah of Chicago, Janet Yang Rohr of Naperville, Denyse Wang Stoneback of Skokie, and Sen. Ram Villivalam, a Democrat from Chicago. Pritzker was also joined by representatives from Coalition for a Better Chinese American Community and the National Asian Pacific American Women’s Forum.

Yang Rohr said the acts of violence at spas in Atlanta on March 16 that left eight dead, including six women of Asian descent, come amid escalating tensions and hate throughout the past year since the COVID-19 pandemic began. The 21-year-old suspect, who was arrested after the fatal shootings, confessed to the crime and remains in custody on charges of murder and assault.

“Let me tell you, our community, your friends, your neighbors, your family, we are reeling from this in a year when every single one of us has had to deal with increasing isolation, increasing deaths,” Yang Rohr said. “We, in our community, have had to proceed more carefully, more fearfully, as we’ve had to watch leadership from the highest levels of our country use pointed and deliberate words of hate to put targets on us, hateful words and hateful language.”

Yang Rohr was referencing politicians who have replaced coronavirus or COVID-19 with the terms “China virus” or even “Kung flu,” including former President Donald Trump.

Last week, Illinois GOP Congressman Rodney Davis was criticized by Democrats after a CNN reporter tweeted that Davis “told me he believed the suggestion there is a relation between rhetoric and hate crimes against Asian Americans is ‘all political correctness.’ Davis instead said phrases like ‘Kung flu’ or ‘China virus’ are no different than saying ‘UK variant.’”

Davis says his remarks were misinterpreted and that he has never used terms like “Wuhan virus” and “Kung flu.” “There’s always a connection between rhetoric and any crimes,” Davis told reporters during a visit to Collinsville on March 22.

Yang Rohr stressed the importance of the Illinois General Assembly passing the Teaching Equitable Asian American Community History Act, or TEAACH Act, that would require public elementary and high schools in Illinois to teach a curriculum studying the events of Asian American history, including the internment of Japanese Americans during World War II.

The bill passed out of a House committee last week.

Mah, whose district encompasses Chicago’s Chinatown, echoed the sentiment that members of the Asian American community have experienced heightened xenophobia since the pandemic began.

Stop AAPI Hate, a group that documents incidents of violence and discrimination against Asian Americans and Pacific Islanders in the U.S., found that nearly 3,800 “hate incidents” were reported from March 19, 2020, to Feb. 28, according to a report by the group.

The report showed that 68.1 percent of the incidents were verbal harassment and 20.5 percent were shunning or the deliberate avoidance of Asian Americans. Physical assault comprises 11.1 percent of the total incidents, the study found.

But Mah said businesses in Chinatown felt the effects of the xenophobia and racism well before the pandemic began.

“I think it’s important to recognize the history of how Chinatown here was established as business leaders, over 110 years ago, moved to Chinatown originally from the loop area where they experienced violence and hostility,” Mah said, speaking before at the news conference which took place at the Ping Tom Memorial Park — named after a Chinatown businessman and civic leader. “It’s unacceptable that more than 100 years later, racism and hate are still issues for our community.”

Pritzker encouraged people to report hate crimes or incidents of discrimination to the hotline for the Illinois Attorney General’s Civil Rights Bureau, which investigates complaints of patterns and practices of discrimination in certain sectors, including housing, public accommodations, and employment.

People can report incidents of hate or discrimination to the Civil Rights Bureau at (877) 581-3692 or civilrights@atg.state.il.us.