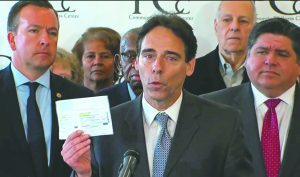 State Sen. Steve Stadelman, a Loves Park Democrat, holds up his son’s insulin bill, which he said was more than $1,400 before insurance. He said he supports a bill to cap out-of-pocket costs at $100 per 30-day supply of insulin for those with insurance. He and others spoke about the legislation during a news conference Friday in Chicago. (BlueRoomStream)

SPRINGFIELD — Lawmakers will aim to pass a law capping out-of-pocket insulin costs at $100 per one month’s supply when they return for the fall veto session, the bill’s sponsors announced Friday at a Chicago news conference.

Manar said pharmaceutical companies, insurers and other industry insiders know the answer to that question, which is why the cost of certain brands of insulin jumped from $35 per vial in 2001 up to $289 per vial in 2018.

Emilija Irvin, a high school student from Downers Grove, relayed her story about having type 1 diabetes and how high insulin prices are influencing her college decisions.

“For my future, if this keeps going the way it’s going, I am very scared,” she said.

Irvin plans to become a music performance major in college, but she said people around her have second-guessed her decision because the risk of not having good health insurance after graduation might make insulin unaffordable.

“As a result, many people, including my own father, have told me that I cannot be a music performance major,” she said. “And for me this was really crushing and also really awakening.”

State Sen. Steve Stadelman, a Loves Park Democrat, said the issue was personal to his family as well — his teenage son has type 1 Diabetes and the sticker price for the drug is more than $1,400. He said his family has insurance with a reasonable deductible, but he is concerned about the future.

“I worry about my son when he is no longer covered under insurance. Will he face these similar challenges in the future?” he said.

Stadelman said making insulin more affordable is not only morally necessary, but good public policy. That’s because not using insulin when it is needed can lead to further, more expensive health complications.

“If people are rationing insulin right now, that’ll make them much more unhealthy as they get older,” he said. “Diabetics avoid long-term health complications and problems by controlling glucose levels by proper insulin usage. We’ll save money long-term by reducing the cost of insulin right now.”

The bill focuses on those who have insurance but are still paying high out-of-pocket costs for insulin. If it’s passed, those costs would be capped at $100 for a 30-day supply.

For those without insurance, Democratic Gov. J.B. Pritzker said, insulin is already covered on Medicaid.

“When you say uninsured, they’d be insured, those who are insured by Medicaid,” he said in responding to a question from the media. “And of course, people who are ineligible for otherwise private insurance can go on Medicaid and would be covered.”

Rep. Will Guzzardi, a Chicago Democrat who will sponsor the bill in the House, said they will work on the bill “so that it provides some sort of sanctuary for everyone who needs insulin,” including those who are uninsured.

The bill also calls on the Illinois attorney general to investigate insulin pricing, determine whether added consumer protections are needed and provide a report to the governor and state agencies by Nov. 1, 2020.

The Legislature returns for fall veto session on Oct. 28.