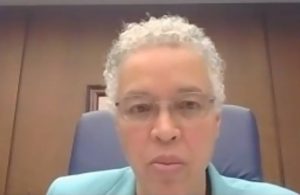 SPRINGFIELD — In the wake of a police shooting that left one teenager dead and a woman injured earlier this month in Waukegan, lawmakers met in a joint hearing of the Senate Criminal Law Committee and Senate Special Committee on Public Safety Tuesday, Oct. 27 to discuss statewide reforms for law enforcement.

“We must address the procedures and policies that perpetuate the inequality and injustice that Black communities face,” state Rep. Justin Slaughter, D-Chicago, a guest speaker at the committee hearing, said. “Holding law enforcement officers to a higher standard and examining ways to increase transparency and accountability will undoubtedly help protect our families and pave the way for a more just future.”

Cook County Board President Toni Preckwinkle testified that change at the state level is required to enact lasting police reform, citing barriers of authority to municipal governments that have tried to implement changes regarding law enforcement.

“At the local level, police reforms have been limited at best,” Preckwinkle said. “The Chicago Police Department, for example, has either delayed implementation, or just refused implementation of the reforms.”

“We believe that the authority to mandate implementation should not be dependent on the will of the police department, but rather, certain reforms should be codified at the state with funding tied to police departments’ compliance,” she added.

Amy Campanelli, who serves as the Public Defender of Cook County, testified that despite body cameras already being mandated by the Chicago Police Department, her office has dealt with several recent cases where officers “blatantly violate their body worn camera policy.”

Campanelli called for the General Assembly to pass House Bill 2111 which would make it a felony for a member of law enforcement to turn off, or fail to turn on, their body camera. Preckwinkle and the ACLU also supported the bill in written testimony.

According to Campanelli, cases that involve body camera footage move through the legal system quicker thanks to an objective third-party view being available to prosecutors, judges and defense attorneys.

“Body cameras and, more specifically, policies that require their constant use and that allow officers to be punished for violating them is the easiest and most effective way to ensure a greater sense of police accountability,” state Sen. Robert Peters, D-Chicago, said. “The era of ‘their word versus mine’ must come to an end. There must be a publicly available, unbiased record of any incidents that occur so that justice can be delivered and so that safety can be prioritized above all else.”

Wojcicki testified to lawmakers that officers wearing body cameras were less likely to be the subject of misconduct claims, and departments with body camera mandates received fewer complaints compared to those without.

“A person might say something, and they go in and the video and they figure out well, nothing much really happened there,” he said. “It’s anecdotal at this point but it does seem to have a certain calming effect.” 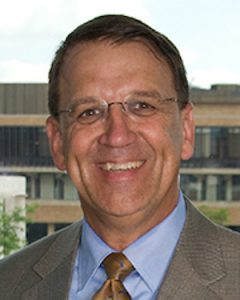 Ed Wojcicki, director of Illinois Association of Chiefs of Police (Photo courtesy of University of Illinois)

According to Wojcicki, as of 2019, only 75 of around 900 law enforcement agencies in Illinois use body cameras. Despite widespread support from law enforcement regarding the use of body cameras, Wojcicki said their prohibitive cost prevents more departments from implementing them.

Lalley said Elgin’s transition to body cameras in 2015 was possible due to a $500,000 federal grant the department received. According to Lalley, the city pays over $170,000 annually to store body worn camera footage. She estimated mid-sized cities with 200 to 300 officers would have to pay close to $200,000 a year to deal with video storage.

“The cost of implementing a program can be a significant barrier for some law enforcement agencies,” she said.

The Association of Chiefs of Police submitted written testimony to the senate committees containing recommendations for making body camera usage more widespread, as less than 10 percent of the state’s law enforcement agencies are utilizing the technology. Most were measures to reduce the costs of video storage and administrative duties.

“Eliminate most of the redaction requirements,” the Association wrote in its testimony. “This is time consuming and expensive, and any citizen with a smartphone can video the same event and share it via social media without any redactions.”

The recommendations also called for deletion of accidental recordings, reporting standards to be relaxed, and for more monetary assistance from the state and federal government to fund body camera programs.

On accountability, multiple witnesses, including retired law enforcement officials, testified on the need for deep reforms to be made both statewide and nationally.

In written testimony submitted to lawmakers, the Law Enforcement Action Partnership, a collective of mostly retired law enforcement professionals from across the country, called for strong civilian oversight of policing and mandated changes to how departments handle misconduct.

“We cannot uphold public safety without earning community trust. Without trust, people do not report crimes, and witnesses refuse to talk to us,” the Partnership testimony stated. “Holding ourselves to a higher standard is the best way to honor our profession.”

Dave Franco, a retired Chicago police officer and member of the Partnership, described a toxic culture in the department where politics influenced career trajectory and officers were encouraged to not report misconduct of fellow officers or intervene when excessive force was being used.

Recommendations to the General Assembly from the Partnership, the ACLU and Cook County officials all called for codified state laws that provide enhanced and expanded whistleblower protections and mandate that officers must intervene when witnessing excessive force.

Those three written testimonies also suggested independent civilian oversight of every department, permanent statewide records of disciplinary and complaint records against officers, and restrictions on the limited liability – also referred to as “qualified immunity” – given to officers in the line of duty that provides legal protection to some forms of alleged misconduct.

“We must have a system that is more just and equitable for both communities and police,” Sen. Elgie Sims, a Chicago Democrat who chaired the committee, said.

According to Franco, officers across the country can only benefit from these changes, as deteriorating trust in law enforcement due to lack of accountability and widespread misconduct puts officers’ lives in danger. Franco told lawmakers that with buy-in from leadership and a commitment from political leaders to institute reform, rank and file police officers “that work hard every day and love their jobs” would adapt to a new model of policing that enhances community safety and fosters more trust in law enforcement.

“I know that they are equal to the test. And with the proper leadership and guidance, we’ll accept that challenge,” Franco said.