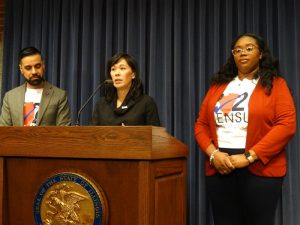 Illinois Department of Human Services Secretary Grace Hou (center) briefs reporters March 11 at the Capitol in Springfield about the start of the 2020 census. With Hou are the agency’s census co-directors Oswaldo Alvarez (left) and Marishonta Wilkerson. (Capitol News Illinois photo by Peter Hancock)

SPRINGFIELD — The Illinois Department of Human Services said the state is poised to have one of the top census response rates in the country despite two tumultuous months of changing deadlines as determined by the Trump Administration.

The state’s 2010 census response rate was 70.5 percent, giving organizers hope of passing that mark by the Sept. 30 deadline — a date recently moved forward one month by the Trump administration.

Maximizing the census count is important, because the population count helps determine federal funding and the number of representatives the state sends to the U.S. House.

The positive trend comes despite challenges posed by the ongoing coronavirus pandemic and changing federal deadlines.

The Illinois 2020 Census Advisory Panel discussed obstacles to self-reporting and shifting standards from the federal government at a regularly scheduled meeting Friday.

“This past month, as you all know, has been a month of many surprises for us at the census office,” Oswaldo Alvarez, co-director of the Illinois Census Office at the IDHS, said.

There were several contributing factors that led the office to reorder its timeline, including delays in in-person door-knocking and the Trump Administration’s Aug. 13 announcement that the census portal would close Sept. 30 instead of Oct. 31.

Additionally, a July 21 presidential memorandum seeking to exclude illegal immigrants from being counted as it pertains to Congressional apportionment also created confusion at IDHS. That memorandum has since been challenged in court, but, if implemented, would cost Illinois up to two seats in the House.

For the 2020 fiscal year, IDHS was funding more than 360 non-profits and municipal governments for the purpose of increasing census self-response rates. But that number has dwindled to a little more than 250 for fiscal year 2021 due to the pandemic, shifting deadlines and other circumstances.

Funds to those nonprofits are disbursed through 30 other non-profit organizations that serve as regional intermediaries, or RIs, which oversee 12 regions of the state and lead hyperlocal outreach efforts.

Intermediaries include health-based agencies such as the Illinois Primary Health Care Association, community outreach groups such as Teens Against Killing Everywhere, and other organizations such as the Metropolitan Mayors Caucus.

IDHS was allocated $29 million for the 2020 fiscal year to be used for census outreach, including nearly $26 million set aside for regional intermediaries.

State agencies assisting in census outreach were allocated $2.3 million, while approximately $900,000 went to the University of Illinois at Chicago for technical assistance and data analysis.

Due to the coronavirus pandemic, not all the funds were spent before the end of the fiscal year on June 30, so they were reappropriated for the current fiscal year. As of Friday, a little over $4.4 million remains unspent.

“We were nervous that it would be a lot more remaining than 4.4 (million),” Marishonta Wilkerson, also co-director of the Illinois Census Office, said at the meeting. “We thought it would be like 10 (million). But the RI’s were creative, and they found different ways to engage their communities virtually and we are happy about that.”

Still, some areas of the state remain below their self-response target rates. As part of its August report, IDHS said many counties had self-response rates below 50 percent. As of July 29, Hardin, Calhoun, Henderson and Alexander Counties had the lowest response rates, with Hardin County in particular sitting at 31.9 percent, 10 percentage points fewer than the next lowest county.

“The governor’s office has asked us to do a final and bigger push in certain areas of population, so we are having our RI’s gear up and do a big push,” Wilkerson said. “Additional canvassing, door-knocking in rural areas and in particularly the African American, Latinx and Asian areas.”