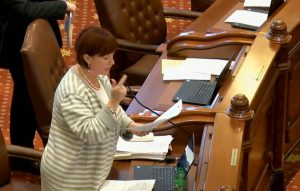 Sen. Heather Steans (D-Chicago) speaks Thursday at the Capitol in Springfield during debate of a follow-up bill she sponsored to clean up some language in the recreational marijuana legalization legislation the General Assembly passed in the spring. Steans also sponsored the original bill. The “trailer” bill was passed by both the Senate and House on Thursday. (BlueRoomStream.com)

SPRINGFIELD — A cleanup bill written to ensure a smooth rollout of the legalization of adult-use marijuana in January passed both chambers of the Illinois General Assembly on Thursday, Nov. 14.

Sen. Heather Steans, a Chicago Democrat who sponsored both the original legalization bill and the follow-up Senate Bill 1557 in the Senate, made clear that public consumption of cannabis will be allowed only at locations that have no food and drink.

“No restaurants, no bars, it can only be in a dispensary or retail tobacco store,” she said.

Those facilities will have to seek waivers from the Smoke Free Illinois Act from their local governments.

The bill also clarifies a “revolving door” provision of the law by prohibiting future members of the General Assembly and their families from having a direct financial ownership interest in a cannabis business until two years after that lawmaker leaves public office.

“This amendment adds ethics language to conform with a two-year revolving door prohibition on members and family having ownership interest that currently exist under gaming law,” said Rep. Celina Villanueva, a Chicago Democrat who carried Senate Bill 1557 in the House.

Villanueva said lawmakers who were in the chamber during the passage of the original cannabis bill and their spouses “currently have a lifetime ban on being able to have a stakeholder ownership” in the cannabis industry. The new language change applies the two-year ban to future lawmakers and their immediate family members.

She said the language was added to address Republican concerns.

The bill also provides that marijuana-related paraphernalia would no longer be illegal in Illinois. But it would remain illegal to operate a snowmobile or any kind of watercraft while under the influence of marijuana.

Steans said it also strengthens and clarifies language that would allow employers to maintain zero-tolerance policies. It also cleans up language in the portion of the bill that expunges criminal records for people who have standalone marijuana convictions on their records, specifically ensuring that outstanding fines do not limit access to expungement.

She said the bill moves up to July, from September, the earliest date municipalities and county governments can begin collecting taxes resulting from marijuana sales.

Villanueva said the bill allows people ages 18 to 21 who are part of the medical marijuana program to consume combustible cannabis, while the previous version limited them to edible products. It also unifies terms throughout the several hundred pages in the law, and corrects grammar and punctuation among the other noted changes.

It also adds stakeholders to multiple boards and commissions created under the original bill.

Villanueva said the technical changes in the bill were proposed by state agencies, lawmakers and stakeholders.

Rep. Curtis Tarver, a Chicago Democrat, questioned Villanueva on behalf of the Chicago Black Caucus and said he would not support the bill due to concerns of that caucus.