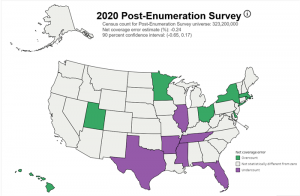 SPRINGFIELD – The Census Bureau released new survey data Thursday suggesting the population of Illinois may have been undercounted by nearly 2 percent in the 2020 headcount.

That was one of the findings of the Census Bureau’s Post-Enumeration Survey, or PES, something the bureau does after each decennial census to assess the quality of the census data. The results do not change the official population numbers of any state, nor do they affect congressional reapportionment, but they do help guide the bureau in its planning for the next decennial census.

“The release of these PES estimates assists us in understanding how well we did this decade, state by state, in our efforts to count everyone living in the United States,” Census Bureau Director Robert L. Santos said in a news release. “Transparency is a critical aspect of scientific integrity. That is why we are releasing these results to the public.”

The other states with undercounts were all located in the South: Arkansas at 5.04 percent; Florida at 3.48 percent; Mississippi at 4.11 percent; Tennessee at 4.78 percent; and Texas at 1.92 percent.

There was no statistically significant undercount or overcount for 36 states, Washington, D.C., or the nation as a whole.

In Illinois, the official 2020 census showed the state’s population as 12,812,508. That was a decline of 18,124, or 0.1 percent, from the 2010 census. As a result of the state’s population loss, combined with large gains in some other states, Illinois lost one of its congressional seats, leaving the state with only 17 U.S. House seats.

However, if Illinois really was undercounted by 1.97 percent, as the survey suggests, that would have meant that the population actually grew by more than 257,000, putting it at just over 13 million.

The population loss that Illinois did see was smaller than many people had predicted. During the 10 years leading up to the census, annual population estimates released by the Census Bureau were showing the population could drop by as much as 1.23 percent —10 times more than it actually did.

In response to those concerns, Gov. J.B. Pritzker signed an executive order in 2019 committing $29 million to census outreach projects to encourage and help people to fill out their census forms.

Thursday afternoon, Pritzker released a statement hailing the survey results as good news, but also expressing frustration that the state’s growth was not reflected in the official census.

“While it is disappointing that these numbers were not reflected in the initial count, I have already spoken to members of our congressional delegation and will work tirelessly to ensure Illinois receives its fair share of federal funding,” he said. “I look forward to celebrating this development with all Illinoisans, including those who routinely badmouth our state.”

During a media briefing on Wednesday ahead of the survey release, Census Bureau officials emphasized that no census is ever perfect, and no survey is perfect either.

They also noted that the quality of the 2020 census was affected by unique factors that included the pandemic and wildfires in the West that damaged air quality and made it difficult for census workers to go door-to-door to gather data from those who had not filled out their census forms.

But even in normal years, they said, reporting errors occur. While people who fill out the census forms are supposed to report the names and ages of people living in the household on April 1 of the census year, overcounts can occur when they include a person who dies before that date or a child born shortly after that date. Undercounts occur when people do not report everyone in the household or fail to fill out the census form at all.

The survey data released Thursday did not identify the causes of undercounts or overcounts within any particular state, nor did it identify the cities, counties or regions within a state where the count may have been inaccurate.

On a national level, however, officials said undercounts generally occur within the Black population, Hispanic or Latino population, American Indian and Alaska Native populations living on reservations and the demographic group that reported being of “some other race.”

Overcounts, they said, tend to occur in the white, non-Hispanic population and the Asian population.