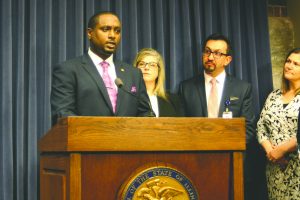 State Rep. Maurice West (D-Rockford) speaks during a news conference Tuesday at the capitol in Springfield about the need for more African-Americans and Latinos to donate blood in Illinois. With low rates of blood donations, “We, as African-Americans, are putting each other at risk,” West said. (Photo by Grant Morgan/Capitol News Illinois)

SPRINGFIELD — Lawmakers on Tuesday warned of problems that could arise from a lack of blood donations from the state’s minority populations.

“I know this may not be a mainstream issue affecting the African-American community,” said Rep. Maurice West, a Democrat from Rockford, “but I’m learning that it’s one of the biggest issues that we face.”

West joined other lawmakers and representatives from the Illinois Coalition of Community Blood Centers at an afternoon news conference encouraging minorities to donate more blood.

While Latinos and African-Americans make up 32% of Illinois’ population, they account for only 5% of the state’s blood donations, according to Sen. Laura Murphy, a Democrat from Des Plaines.

The majority of Latinos, however, have type O blood, which is consistently in highest demand, as it can be transferred to people with different blood types in an emergency.

African-Americans, on the other hand, are prone to greater rates of certain rare blood traits and diseases, including sickle cell anemia, hypertension, lupus and prostate cancer, according to the blood center coalition’s news release.

“The more transfusions a patient receives, the harder it is to find a compatible match,” ICCBC President Linda Gerber said.

The least risky match available to these patients, Gerber added, “would be that of someone with a similar ethnic background.”

But African-Americans provide less than 1% of the country’s blood supply, leading to many difficulties in finding matches.

“We, as African-Americans, are putting each other at risk,” West said.

Republican Rep. Tom Bennet, of Gibson City, did not attend the event, but shared a personal story about the importance of well-stocked blood supplies.

“I have great appreciation for how quickly your situation can change and how, when blood is needed, it has to be tested, on the shelf and ready to go at a moment’s notice,” said Bennett, who was badly injured in an auto accident in Bloomington in early March.