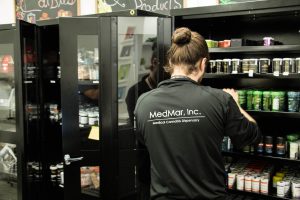 A worker at MedMar’s Chicago Dispensary, two blocks north of Wrigley Field, organizes products. It is one of dozens of facilities around the state that will begin offering recreational marijuana on Jan. 1. (MedMar photo)

Illinois will never be the same as of Jan. 1.

However, only time will tell whether that change will be for the better or worse as the Prairie State allows the recreational use of marijuana.

Illinois is the first state to approve marijuana use from the top down, with the General Assembly saying “yes” before the public did. In the other 10 states to legalize the recreational use of marijuana, there was first a grassroots effort and public support shone via referendum.

Gov. J.B. Pritzker was an early supporter of legalizing recreational marijuana in Illinois, citing the expected economic boost for the state and the racial inequity in minorities being heavily prosecuted for marijuana-related offenses.

Pritzker once again stressed the need to address the social inequity issue in a post on social media Dec. 26.

“Illinois’ cannabis industry is going to create real opportunity in communities harmed by the failed War On Drugs,” Pritzker said on Twitter, touting the state’s Department of Commerce and Economic Opportunity having seven workshops across the state on adult-use marijuana dispensaries and hundreds of entrepreneurs turning out. He also encouraged “social equity applicants” to apply for a state license.

Earlier in December, Pritzker accompanied Cook County State’s Attorney Kim Foxx as she filed a motion to vacate 1,000 low-level marijuana convictions. He said that a criminal record carries with it more than stigma.

“It prevents people from being considered for job opportunities, from getting a loan or a mortgage, from renting an apartment, from applying for financial aid for college, from getting a professional license and more,” the governor said. “In sum, it can crush a person’s ability to live a full and dignified life.

“Statewide, hundreds of thousands of Illinoisans are held back by the low-level cannabis-related records, a burden disproportionately shouldered by communities of color. Hundreds of thousands of others have had to watch their friends and loved ones struggle because of an arrest or conviction they got for something that will be legal starting Jan. 1. This is to say nothing of the fact that arrest rates and prosecution have never reflected consumption rates across racial lines.

“We will never be able to fully remedy the depth of that unfairness and the damage it visited upon so many families. We can govern our state with the courage to admit the mistakes of our past — and the decency to correct the record and set a better path forward.”

Revenue from marijuana sales in Illinois is expected to reach $23 billion by 2025, according to themedicalcannabiscommuity.org.

However, with the positives of social equity and money for the state, the legalization of recreational marijuana also creates the possibility of more impaired drivers on state roadways.

A DUI Cannabis Task Force has been created in Illinois, but its recommendations on improving enforcement of driving under the influence of marijuana are not due to the governor until July 1.

The Task Force has yet to have a meeting and more than half of the panel’s positions have not even been filed yet, according to the Governor’s Office.

Just five of the 11-member Task Force have been named, according to the Governor’s Office of Executive Appointments website. Members named to the panel so far are: state Sen. Neil Anderson (R-Andalusia); Khadine Bennett, director of advocacy and intergovernmental affairs with the American Civil Liberties Union of Illinois; state Rep. Kelly Cassidy (D-Chicago); Corrine Cantwell Heggie, president of the Women’s Bar Association of Illinois; and state Rep. Patrick Windhorst (R-Metropolis).

Despite anyone over the age of 21 being able to use marijuana as of Wednesday, several area communities have said “no” to the sale of the product within their borders.

Area municipalities that have taken a stand against the sale of pot within their borders are: