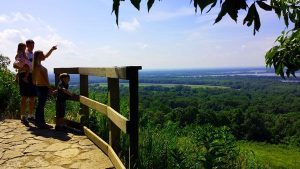 Pere Marquette State Park in southwestern Illinois offers some impressive views of the Illinois and Mississippi rivers along its trails. (Photo courtesy of Pere Marquette Lodge)

SPRINGFIELD — As Illinois begins its official reopening and residents flock to state parks this summer, the Illinois Department of Natural Resources faces a severe staffing shortage, according to IDNR chief of staff Kristin DiCenso.

“It’s very, very difficult to manage,” DiCenso said. “We get a lot of complaints from not only the general public, but also from legislators about staffing at sites.”

DiCenso testified Thursday, June 10 before the state Senate Tourism and Hospitality Committee at Southern Illinois University in Edwardsville. The Senate committee hearing was for discussion only, and no committee action was taken.

While the number of employees decreased by the hundreds, the agency has since gained responsibility of about 100 additional sites through the Illinois Historic Preservation Agency, which was absorbed by IDNR in 2017.

DiCenso said the agency would ideally have 2,500 employees — staffing levels the agency has not seen since before 2003.

“We have to ensure the best service to our constituents, and right now we’re not doing that,” she said. “Where we are now is, it’s a struggle, it’s a daily struggle. If someone gets sick, sometimes a park doesn’t get opened for the day. That’s completely, completely unacceptable. But that’s where we are.”

DiCenso said IDNR closed its public areas early on in the pandemic but began reopened most of them by May 29, 2020.

According to attendance records, Illinois state parks, fish and wildlife recreational areas, as well as historic sites, saw 26.7 million visitors from June through December in 2019, compared to 28.4 million visitors during the same time period in 2020, she said.

“We actually increased our visitors last year,” DiCenso said. “We also saw an increase in camping across the state, surpassing what we’ve seen in the past. This proves how much Illinoisans value their public lands.”

“Camping reservations are already through the roof, so we’re looking forward to a very active and busy season,” she added.

DiCenso said IDNR could address its staffing shortage and improve its service with increased state funding. The amount of state general revenue funding to IDNR for the upcoming fiscal year is unchanged from the previous year at roughly $40.3 million. 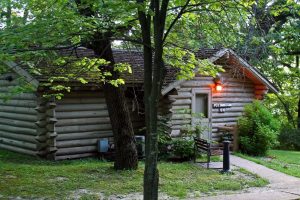 A Pioneer cabin that can accommodate a family at Starved Rock State Park in Utica. (Photo courtesy of Starved Rock Lodge)

The committee also heard from downstate industry officials and business owners who worry local tourism spending will not quickly return to pre-pandemic levels.

In 2018 and 2019 combined, visitors spent more than $1.4 billion in the six-county region that the tourism bureau promotes, and they generated nearly $80 million in state and local tax revenues. The six-county region covers Madison, Macoupin, Montgomery, Jersey, Calhoun and Greene counties in southwest Illinois.

“The impacts of COVID-19 were drastic and devastating,” Jobe said. “Losses were deep and will take time to recover to pre-pandemic levels, especially for the meetings market and the sports tourism market. The recovery has been uncertain and slow at times.”

“There are millions and millions of dollars in unfunded projects that, if they were funded, could be year-round destinations for visitors to come from all over the country in the Midwest to enjoy,” he said.

“Our state parks are critical to the economic success of many of our regions,” he said.