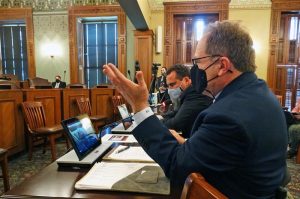 SPRINGFIELD – Illinois lawmakers opened their first public hearing Tuesday, May 25 on a proposed set of new House and Senate district maps with Democrats and Republicans still at sharp odds over how the maps were drawn and whether or not they are fair.

House and Senate Democrats unveiled the proposed maps late in the evening on Friday, May 21. They were reportedly drawn using population estimates from the Census Bureau’s American Community Survey because official numbers from the 2020 census will not be available until August or September.

Allan Lichtman, a history professor at American University in Washington, D.C., who was hired as a consultant by the House and Senate Democratic caucuses, testified that in his opinion, ACS data is acceptable to use for redistricting because in the five years leading up to the 2010 census, those estimates for Illinois were off by only about 0.3 percent.

“Nationally, there is no requirement under law or the constitution in Illinois that only decennial U.S. census data can be used for redistricting,” he said. “In fact, the majority of states, I repeat that, according to the National Conference of State Legislatures, do not explicitly require that you must use only decennial census data for internal redistricting purposes, particularly of course when such data is not available or delayed.”

He also praised Illinois for legislative maps produced in the past that enabled Black and Hispanic communities to gain representation in the General Assembly that roughly mirrors their numbers in the state population as a whole.

But upon questioning from Senate Republican Leader Dan McConchie of Hawthorn Woods among others, Lichtman said he could not tell whether the proposed maps released over the weekend would accomplish the same thing because he had not seen the demographic data that was used to draw them.

Rep. Elizabeth Hernandez, D-Cicero, who chairs the House Redistricting Committee, said the maps before the committee were only a draft, but McConchie said the committee still needed to see the demographic numbers.

“How can we appropriately measure the draft without the numbers,” he asked.

Hernandez said those numbers would be forthcoming, but McConchie insisted lawmakers needed them before they could consider the proposed maps.

“We’re looking at shapes on a map,” he said. “That doesn’t give us the level of detail necessary … There’s no data.”

Other Republicans complained that the proposed maps still have not been put into bill form, which would provide legal descriptions of the boundaries of each district.

“The maps unveiled Friday night are built on old flawed data that never was meant to be used for redistricting,” she said. “We and many other organizations and community members have said this repeatedly. The American Community Survey five-year estimates undercount Illinoisans by tens of thousands.”

The Democrats’ proposed maps also drew significant opposition from various religious and ethnic groups, particularly in Chicago and its surrounding suburbs, who complained that the plan threatens to divide communities, break up voting blocs and dilute minority voting power.

Shlomo Soroka, director of government affairs for the Orthodox Jewish advocacy organization Agudath Israel of Illinois, criticized the maps for splitting up large portions of the Orthodox Jewish community that reside in or near Illinois’ current 16th House District.

Soroka said his group participated in multiple hearings and gave input on maps.

“I drew maps, I submitted them, reached out to numerous legislators and really did everything within my power to convey the importance of keeping our community together in a single compact and contiguous district,” he said.

But in the proposed map, he said, the Orthodox Jewish community was “further split and divided” between four districts.

Dilara Sayeed of the Illinois Muslim Civic Coalition also complained that even after her group and many others testified at numerous earlier public hearings and even submitted proposed maps showing how they wanted their communities to be reflected, the Democrats’ proposed map did not reflect those concerns.

“You’re hearing from all of us saying please don’t approve maps, please don’t vote yes on maps where our voices, our leadership and our communities have not been heard,” she said.

Jose Marco-Paredes of the Latino Policy Forum also said he was disappointed in the proposed maps because it was impossible to tell what impact it would have without the underlying demographic data from the underlying survey data that was used to draw the maps.

“We know that all those people who voted for Rep. Mah in 2016 to be the first Asian American General Assembly member would be as surprised as we were,” she said.

Hearings are scheduled to continue Wednesday and Thursday (today and tomorrow May 26-27). Legislative Democrats are pressing to pass a new set of legislative maps before the General Assembly’s scheduled adjournment on Monday, May 31.