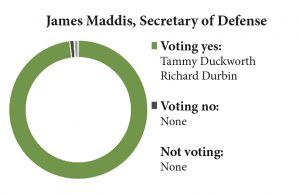 James Maddis, Secretary of Defense: The Senate on Jan. 20 voted, 98 for and one against, to confirm retired Maine Gen. James N. Maddis, 66, as the 26th secretary of defense since the office was established in 1947. When Maddis retired from active duty in 2013, he was commander of the U.S. Central Command, which is directs American military operations in the Middle East, North Africa and Central Asia. Maddis became the first member of President Donald Trump’s cabinet to receive confirmation. The negative vote was cast by Sen. Kirsten Gillibrand, D-N.Y.

A yes vote was to confirm Maddis to head the Department of Defense. 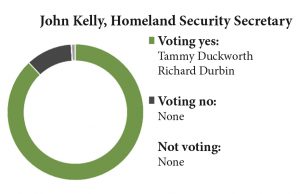 John Kelly, Homeland Security Secretary: The Senate on Jan. 20 voted, 88 for and 11 against, to confirm retired Marine Gen. John F. Kelly as the fifth secretary of homeland security since the department was established in 2002. Kelly, 66, was commander of the U.S. Southern Command (spanning South and Central America and most of the Caribbean) when he retired in January 2016. He is the highest ranking military official to have lost a child in Iraq or Afghanistan; his son, Marine 1st Lt. Robert Kelly, died in combat in Afghanistan in November 2010.

A yes vote was to confirm Kelly to head the Department of Homeland Security.