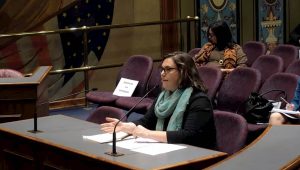 Jenny Epstein, director of strategic opioid initiatives for the Illinois Department of Public Health, told a panel of senators that the number of opioid deaths in the state declined from 2017 to 2018, the first drop in five years. “Although we are proud to have made some progress, there is still much work to be done to keep our citizens safe and healthy,” Epstein said. (BlueRoomStream)

SPRINGFIELD — Illinois is “showing progress” toward the state Department of Public Health’s three-year goal of reducing opioid deaths by one-third by 2020, an official told lawmakers Oct. 21.

That initiative was set by former Republican Gov. Bruce Rauner’s administration in an action plan implemented in 2017, with a focus on prevention, treatment and community response.

Jenny Epstein, director of strategic opioid initiatives, said the number of opioid overdose deaths in Illinois decreased in 2018 for the first time in five years. There were 2,167 opioid deaths in Illinois last year, down from 2,202 in 2017.

“Although any decrease in deaths is something to be celebrated, this decrease was driven primarily by a decline in deaths among non-Hispanic whites,” she said.

The rate of opioid overdoses “continued to increase” among black and Hispanic residents during the same time period, highlighting a “persistent disparity.”

“IDPH and its partner agencies agree that substance use disorder must be examined through a healthy equity lens, and that evidence-based policies and programs need to be prioritized to increase access to treatment and reduce risk of overdose for this high-risk population,” Epstein said.

She presented the information to a special panel of state senators formed to assess Illinois’ strategy to tackle the opioid crisis and create bills to address any issues it discovers. Monday was the Opioid Crisis Abatement committee’s first meeting.

“What I’m really looking forward to is figuring out where the gaps still are. I think that when (the Department of Public Health) began their action plans, the problem was so big and so much was unknown that these years have gone by quickly — we’ve learned a lot, we’ve made a lot of progress, but obviously there’s still going to be a lot to do,” Sen. Rachelle Crowe, a Democrat from Glen Carbon, said. “There’s so many different people affected. There’s been such a stigma associated. It’s every aspect of our population that’s affected, regardless of what areas they come from.”

Epstein said her department’s budget for opioid-related programs is about $11.5 million — $1.6 million in state funds and the rest in federal grant money.

The Public Health Department and the Department of Human Services’ Division of Substance Use Prevention and Recovery have co-led the statewide effort to lower the number of opioid-related deaths in Illinois. Officials there have coordinated with other agencies, among them the Department of Corrections, the State Police, Criminal Justice Information Authority and Healthcare and Family Services.

“Although we are proud to have made some progress, there is still much work to be done to keep our citizens safe and healthy,” Epstein said.