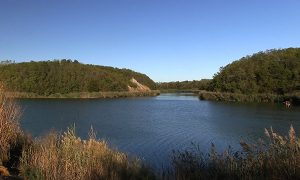 The Mazon River is designated as non-navigable under Illinois law, meaning it is not wide or deep enough to carry commercial traffic such as barges.

SPRINGFIELD – The Illinois Supreme Court is being asked to decide the extent to which property owners can block anyone else, including neighboring property owners, from accessing a river that runs through their property.

It’s a question of law that Illinois courts have not fully addressed before and one over which different states have vastly different policies.

The case involves two property owners who own land along the Mazon River in Grundy County, a portion of which has been declared a National Historic Landmark because it has significant and unique fossil deposits dating back some 300 million years.

The Mazon River is designated as non-navigable under Illinois law, meaning it is not wide or deep enough to carry commercial traffic such as barges.

In September 2016, Kodat called the Grundy County Sheriff’s Office to report two people kayaking in front of his property. Sheriff’s officers responded and informed Holm that he was trespassing by kayaking on the river, even if he remained in the kayak and never went on land.

Holm then sued, asking the court to declare that as a riparian landowner, he had a right to access the full length of the river, even if that meant traversing across Kodat’s property.

Although there were allegations that Holm had, in fact, been taking fossils from Kodat’s property, that was never adjudicated in court.

At first, the trial court sided with Holm, saying he had a right to access the entire surface of the river. But Kodat asked the court to reconsider that decision. In March 2020, the court reversed itself and held that Kodat had an absolute right to exclude anyone from accessing the portion of the river that flowed across his property.

The 3rd District Court of Appeals upheld that decision.

At issue, according to Holm’s attorney Zachary Pollack, is whether a “civil law” principle should apply, allowing a riparian landowner to use the entire surface of a non-navigable river or whether courts should apply a “common law” principle that says riparian landowners have a right to exclude others from accessing the portion of a river that crosses their property.

Pollack noted that some states, like New Mexico, have laws that effectively make rivers and streams public property, thus prohibiting landowners from barring public access to those waters.

“We don’t have that here,” he said during oral arguments Tuesday. “So again, you’re dealing with a different framework.”

In Illinois, he said, courts have never directly addressed the question of the civil law principle that applies to accessing rivers, lakes and streams. Most decisions have dealt with access to lakes.

The most notable, he said, was a 1988 decision dealing with access to Lake Zurich, a private body of water in Lake County. In that case, the plaintiff, who owned property on the lake, operated a business that rented boats to the public for use on the lake and the court held that those customers were entitled to “reasonable use” of the entire lake, including the waters above other property owners’ portion of the lake bed.

But Kodat’s attorney Chad Layton argued that there are significant differences between a lake and a stream, and he said property owners along a stream like the Mazon River have a legitimate interest in keeping people off of their property.

The court is likely to issue its ruling on the case later this year.