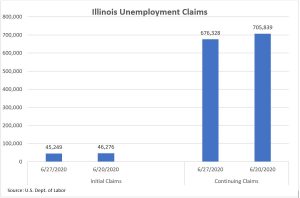 SPRINGFIELD – The number of Illinois workers receiving state unemployment benefits fell by more than 29,000 during the last week of June as many businesses resumed operations after 14 weeks under a stay-at-home order brought on by the COVID-19 pandemic.

The U.S. Department of Labor said Thursday there were 676,338 people in Illinois receiving continuing unemployment benefits during the week that ended June 27. That was 29,511 fewer than the previous week.

First-time unemployment claims also fell to 45,249, a decrease of 1,027 from the previous week, but still a 463 percent increase over the same week a year ago when only 8,038 initial claims were filed.

In addition to those workers who qualify for traditional unemployment benefits, another 32,587 Illinoisans filed first-time claims for Pandemic Unemployment Assistance, more than triple the number from the week before.

PUA is a program funded entirely by the federal government under the CARES Act to extend benefits to independent contractors who aren’t normally covered under traditional state-funded unemployment.

The Department of Labor also reported figures for the Pandemic Emergency Unemployment Compensation program for the week that ended June 13, two weeks earlier than the other unemployment numbers.

PEUC is another federally-funded program that extends benefits for up to 13 weeks for people who have exhausted their state-funded benefits. That was down 15 percent from the week before.

First-time PEUC claims during that week in mid-June totaled 32,604, a decrease of 14 percent from the prior week.

On Friday, June 26, Illinois entered Phase 4 of Gov. J.B. Pritzker’s reopening plan. That allowed many retail establishments to reopen. Bars and restaurants also were allowed to open for indoor dining while schools were allowed to reopen for in-person summer learning programs, all subject to capacity limits and social distancing requirements.

Nationally, just more than 1.4 million Americans filed first-time claims during the final week of June, an 8.2 percent decrease from the week before.

The Department of Labor reported a seasonally-adjusted 19.3 million Americans receiving continuing jobless benefits, an increase of 55,000 from the week before, while the national unemployment rate held steady at 13.2 percent.