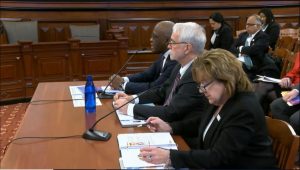 Robert Jones (left) chancellor of the University of Illinois at Urbana-Champaign, U of I System President Timothy Killeen and U of I Executive Vice President Barbara Wilson testify before a state Senate appropriations committee Feb. 26 at the Capitol in Springfield. (BlueRoomStream.com)

Pritzker proposed an average 5 percent increase for state university operating budgets, or about $55.6 million, contingent upon voters in November approving a constitutional amendment to allow a graduated income tax structure.

But three higher education institutions – Eastern Illinois University, Governors State University and the University of Illinois System – each tried to make its case for even bigger increases before a Senate budget committee.

The largest of those requests came from the U of I System, with its three campuses in Urbana-Champaign, Springfield and Chicago. It is seeking a 12.1 percent increase, or an additional $75.3 million, for its operating budget.

“Adjusted for inflation, this increase would still be below … our fiscal 2015 funding level,” said U of I System President Timothy Killeen. “And I want to remind you, we now have many thousands more students in our classrooms than we did back then.”

All three institutions said they are still recovering from the effects of a two-year-long budget impasse from July 2015 through August 2017 when higher education took the heaviest funding cuts.

Killeen said the proposed increases at U of I would go toward salary increases, hiring additional faculty and increasing student financial aid.

“We do know that students who are accepted into our university and often leave because of financial issues,” he said.

But some members of the committee were skeptical of the need for that large of an increase. Among those was Sen. Scott Bennett, a Champaign Democrat, who noted that U of I recently announced plans to raise tuition starting in the fall of 2020 after going five years with no tuition increases.

“When, by then, you had to increase tuition, it was at the same board (of trustees) meeting in which certain administrators also got increases,” Bennett said.

He then asked, “What assurance can you give us that this growth will be in ways that we will see that will benefit a classroom experience and not simply grow a network of administrators across the system?”

Killeen, however, noted that during the budget impasse, U of I eliminated about 300 higher-level administrative positions and that the school’s focus would be building up its teaching faculty by hiring 100 new faculty per year for the next five years.

In his budget proposal, Pritzker said the proposed 5 percent increase for higher education – as well as other increases throughout state government – could occur only if voters approve the constitutional amendment on income taxes. Without that, he said, next year’s budget would be essentially the same as the current year’s budget.

“It would be a setback for us, I’ll be honest,” Killeen said in response to a question from Sen. Elgie Sims, a Chicago Democrat. “I’ll be honest, this is a time for the state to be investing in public higher education. We’re demonstrating what can be done when you’ve got a healthy public education system.”

Other university officials gave similar answers when asked how they would be affected if the state adopted what Sims called a “Plan B” budget.

“Those funds are to help us with our increasing efforts for student success, particularly for our minority and low-income students,” said EIU President David Glassman, who is seeking a 6.9 percent increase for that campus.

Glassman noted that minority students make up about 34 percent of the student body on the EIU campus in Charleston, and 36 percent are first-generation college students, many of whom need more academic and social supports than middle-class, non-minority students in order to succeed.

Officials at Governors State University, which is located on the south side of the Chicago metropolitan area, said much the same thing. Enrollment at GSU is 57 percent minority and 36 percent are first-generation college students.

“It’s not a pretty situation,” said Angela Sebastian-Hickey, a member of the school’s board of trustees. “During the budget crisis and impasse, we basically depleted our reserves in order to get through that crisis period. The unions went without for such a long period of time, and we just had to negotiate increases in salaries for our instructors, and, you know, long overdue, so that’s locked in. We have to pay for that. And, you know, we’re trying to hold tuition for our students.”

Earlier in the meeting, Sebastian-Hickey emphasized the need to hold down tuition rates at GSU.

“When our students don’t receive funding, they don’t go to school,” she said. “It’s not that they go to another school, they just don’t go.”

The hearing was just the first in a series of hearings lawmakers will have as they start to cobble together a budget for the upcoming fiscal year, which begins July 1. The final budget will likely come up for a vote just before the scheduled adjournment date of May 31.