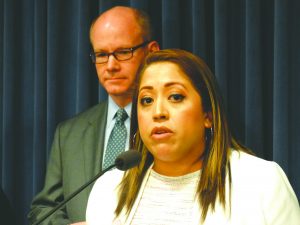 SPRINGFIELD — Two Democratic state lawmakers joined a group of immigration rights advocates Wednesday, May 22 in calling for passage of a bill that would effectively make Illinois a “sanctuary state.”

Rep. Celina Villanueva, of Chicago, and Sen. Don Harmon, of Oak Park, said they are pushing for passage of a bill that would limit how much cooperation public agencies in Illinois can provide to the U.S. Immigration and Customs Enforcement, or ICE, in its efforts to enforce federal immigration laws.

“In a time when separating families has become synonymous with the U.S.-Mexico border, families in Illinois are also under the threat of separation due to ruthless, harmful and lawless immigration enforcement,” Villanueva said during a Statehouse news conference.

She specifically pointed to a program called the 287(g) program – named after a 1996 addition to the Immigration and Nationality Act – that authorizes ICE to contract with state and local law enforcement agencies, allowing designated officers to perform limited immigration law enforcement functions.

“What they’re trying to do is scare our families, our immigrant families, into not being able to report crimes that are happening in their communities, … living in fear of going to work every day, taking their kids to school, just living lives,” Villanueva said.

Lucia Wrooman, a Mexico City native now living in the Chicago area, said through a translator that many immigrants like her are already afraid to have any dealings with law enforcement, even when they are victims of crimes. She said allowing law enforcement to work as ICE agents would make that situation worse.

“At this moment, we live in fear because it seems that any contact we do with police could mean being arrested and deported,” she said.

It would also prohibit law enforcement officials from asking anyone who has been arrested or detained about their citizenship or immigration status, or their place of birth. That prohibition also would apply to people who submit to questioning, crime victims, witnesses and any person who contacts law enforcement seeking assistance.

Additionally, it would call on the state attorney general to propose rules limiting how much assistance certain public agencies could provide to immigration officials. Those rules would apply specifically to public schools and higher education institutions, state-funded health care facilities, public libraries, facilities operated by the secretary of state and courthouses.

Soon after coming into office in 2017, President Donald Trump issued an executive order aimed at cutting off federal funding to so-called “sanctuary cities” that refused to cooperate with federal immigration authorities. Later that year, the Justice Department announced that cities applying for certain public safety grants would have to comply with federal immigration enforcement.

Chicago, which has declared itself a sanctuary city, was one of several states and cities around the country to challenge those orders in court. The city won the case in U.S. District Court, and in April 2018, the 7th Circuit Court of Appeals in Chicago upheld a nationwide injunction against the policy.

“That policy from the White House, and specifically from the Justice Department, has been challenged in court by a number of jurisdictions, including the city of Chicago,” said Fred Tsao, senior policy counsel for the Illinois Coalition for Immigrant and Refugee Rights. “All of those challenges have prevailed to date, so we’re pretty confident that this could withstand some further challenge from this administration.”

House Republican leaders did not immediately respond to a request for comment about the bill.