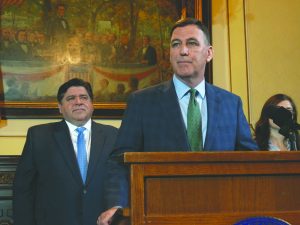 John Sullivan, acting director of the Illinois Department of Agriculture, and Gov. J.B. Pritzker announce that Illinois farmers can now apply for licenses to grow industrial hemp. They made the announcement Tuesday during a news conference at the Statehouse in Springfield. (Photo by Peter Hancock/Capitol News Illinois)

SPRINGFIELD — Farmers in Illinois can now apply for licenses to grow and process industrial hemp.

Democratic Gov. J.B. Pritzker announced Tuesday, April 30 licenses are available through the Illinois Department of Agriculture, saying he expects it to provide a significant boost to the state’s agricultural economy.

“Industrial hemp is a potentially-billion-dollar-a-year industry that Illinois will now take part in,” Pritzker said during a Statehouse news conference. “From farming and processing to sales and exports, this will have a massive impact on our state’s economy.”

Illinois was once a major producer of hemp until it was criminalized in 1937. But Congress reopened the market in the 2014 Farm Bill, which authorized states to launch research pilot projects. It became fully legal under federal law with passage of the 2018 Farm Bill, which allows states to authorize hemp production as long as the plants contain no more than 0.3% THC, the psychoactive chemical in marijuana.

John Sullivan, acting director of the Illinois Department of Agriculture, said there are two major types of industrial hemp. One is used for its fiber, which can be processed into a wide range of materials from textiles to plastics. Another is used primarily for its oil, known as CBD oil, which is sold over-the-counter for a variety of medical uses such as controlling seizure disorders.

“I feel very confident that hemp has the potential to create jobs in the rural parts of the state, and quite frankly in the urban parts as well,” Sullivan said. “I’ve had a lot of interest (expressed) from the urban areas of the state as well. You don’t need acres and acres to grow hemp. You can do it on a smaller plot.”

Markets for the crop, however, are still in the development stage. It is not traded on the Chicago Mercantile Exchange and there are no local marketplaces to sell the crop in the same way farmers sell wheat, corn or soybeans at local grain elevators, although Sullivan said there are some available in surrounding states.

Sullivan added he expects more markets to emerge as the industrial processing side of the business begins to grow.

“Once we know how many people are growing it, that’s going to lead to the processing side of it,” he said. “We have to grow it before we can process it.”

Pritzker said it was a priority of his administration to get the permitting process in place in time for the 2019 growing season. Tuesday’s announcement that applications can now be completed online came one day after the Department of Agriculture published its final regulations.

Among other things, those regulations require producers to identify the exact location of the fields or facilities where they grow the crop and to submit to regular inspections by the Department of Agriculture to make sure the plants are in compliance with THC limits.