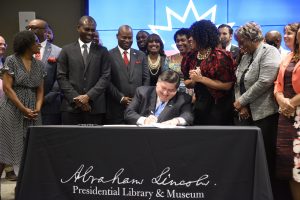 SPRINGFIELD – The day that marks the anniversary of the day in 1865 when some of the last enslaved Americans learned that they had been freed is now an official state holiday in Illinois.

“With this new law, no longer can a child grow up in Illinois without learning about Juneteenth in school,” Pritzker said. “With this change, the people of Illinois will have a day to reflect on how the freedom that we celebrate just two weeks later, on the Fourth of July, was delayed to Black Americans.”

Lincoln signed the Emancipation Proclamation on Jan. 1, 1863. It declared that all slaves held in states that were in rebellion against the United States were immediately and permanently free.

That proclamation did nothing, however, for slaves held in states like Kentucky and Maryland that had not seceded from the Union. They would not become free until after ratification of the 13th amendment in 1865.

It also did not immediately free slaves who were held in territory that was still under the control of the Confederacy. Those slaves had to wait until Union forces captured their territory which, in many cases, did not happen until near the end of the war.

Most historians date the end of the war as April 9, 1865, when Confederate Gen. Robert E. Lee, who led the Army of Northern Virginia, surrendered to Gen. Ulysses S. Grant at Appomattox. But not all Confederate armies surrendered at that time. 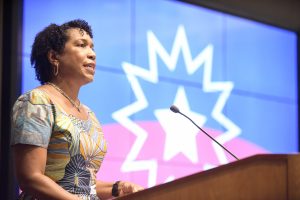 Juliana Stratton, Illinois’ first Black lieutenant governor and a descendent of enslaved people from Mississippi, spoke about her own ancestors struggles at the ceremony signing into law Juneteenth, June 19th, as a paid state holiday. (illinois.gov)

It was more than two months later, on June 19, 1865, when federal forces reached Galveston, Texas, and informed enslaved people in that city, and throughout Texas, that they had been freed.

Juliana Stratton, Illinois’ first Black lieutenant governor and a descendent of enslaved people from Mississippi, spoke about her own ancestors who continued to be held in bondage even after the Emancipation Proclamation was signed and said that for them, Juneteenth was “the true Independence Day.”

Under the new law, June 19 will be recognized as an official state holiday and all flags covered by the Illinois Flag Display Act will be flown at half-staff. In addition, a Juneteenth flag will fly over the State Capitol in Springfield.

Juneteenth will also be a paid holiday for state workers and public school employees whenever that day falls on a weekday, which will happen first in 2023.

Currently, 48 states recognize Juneteenth as either a ceremonial or official state holiday.

The Abraham Lincoln Presidential Library and Museum is currently displaying a rare signed copy of the Emancipation Proclamation. It is one of 48 copies that were made and sold to raise money for sick or wounded Civil War soldiers in 1864, all signed by Lincoln, Secretary of State William Seward and Lincoln’s aide John Nicolay. Of those copies, only 27 are known to still exist.

The original, hand-written version that Lincoln signed in 1863 was destroyed in the Chicago Fire of 1871.