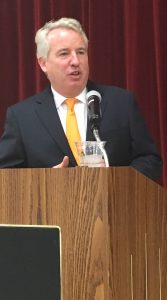 Chris Kennedy took the Illinois political establishment to task in no uncertain terms last Saturday, accusing its leadership of having divided loyalties and the state’s political culture of being infected with corrupt self-interest.

The Democratic candidate for governor spared neither Democrats or Republicans, saying “crony capitalism” has led to a state of affairs in which social injustice is being perpetuated because elected officials are not putting the common good ahead of their own self-interests.

Kennedy made the comments during an appearance before 100 voters at the auditorium of Dominican University’s Priory campus in west suburban River Forest.

He was joined by several family members, including his sister Rory, who had flown in from California with her family to campaign for her brother.

Kennedy is focusing on attracting disaffected Democrats who are weary of machine politics and of entrenched old school Democratic leaders like  Illinois House Speaker Michael Madigan and Joseph Berrios, the Cook County Assessor.

They and others, Kennedy said, control a party political apparatus that is choking democracy in the state. Madigan, Kennedy said, has made millions representing major Cook County property owners who routinely appeal their real estate taxes to Berrios’ office.

Kennedy has neither the bottomless pockets nor the support of Illinois political establishment, as does his main primary opponent, billionaire J.B. Pritzker.

What he does have, he and his supporters say, are solid ideas and a willingness to stand up to those elected officials who he believes have divided loyalties between their elected offices and outside employment.

Pritzker has also thrown his lot with the state’s power brokers, meeting with an array of movers and shakers the past six months.

A major benefit of that political alignment is support from labor unions that have long backed Madigan. The unions collectively pour millions of dollars every election cycle into several political funds Madigan controls. So far 23 labor unions have endorsed Pritzker, as have numerous other elected officials.

Kennedy made it clear he’s taking a different path that runs through the grass roots of Illinois politics. He called for term limits for all state level office holders, something that also goes against the political grain of Madigan, who has been House Speaker all but two of the last 34 years.

Pritzker, whose name recognition pales in comparison to Kennedy’s has been betting on a massive media presence to put his face and message in front of voters since this spring, with more than $28 million of his personal fortune contributed to his campaign. 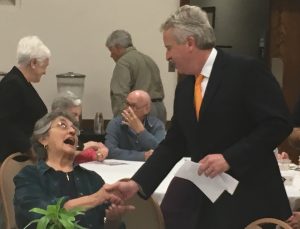 “No other state in America does it the way we do it here,” said Kennedy, who recalled his tenure as the 2012-13 Lund-Gill chair holder at Dominican. That year he taught a course entitled “Catholic Justice and the American Ideal.”

“Freedom is the measure of a man’s dignity,’ Kennedy said. “Economic mobility meets the standard of Catholic Justice,” and that the current system in Illinois “violates the test left and right.”

The current system, he said, fails to provide an adequate education for too many people in Illinois, particularly lower income minorities. And without education, he said, there is little hope for advancement.

“If you are born poor, you’ll stay poor,” he said. Even those who are more middle class, he said, face a life of “constant threat and hazard.”

Kennedy’s audience warmly embraced both the message and the messenger.

Sarah Schwarting and her mother, Sue, of Oak Park, had spent the morning at the Oak Park Farmer’s Market gathering petitions for Kennedy. Both admitted they were impressed by the Kennedy charisma, but said that is not what led them to volunteer their time and effort.

“It’s the Kennedy ethos,” Sarah said. “He’s the embodiment of what the Democratic Party should be.” Asked what that was, she said, common sense,” then elaborated.

“It’s about the worth and dignity of the human person.”

“We’re finding more people who are excited to see us (out campaigning).”

Attorney and former Forest Park Village Commissioner Rory Hoskins stood in the back of the room wearing a “Kennedy/Joy” t-shirt.

Hoskins said he believes Pritzker has spent the massive sums he has in order to catch up with Kennedy’s sterling name recognition.

“Most people already know the name Chris Kennedy,” Hoskins said. But Hoskins said he supports Kennedy because, “I think he’s good for the state.” And not just Cook County.

“We’re a big state, very diverse, and you have to take everyone in account,” Hoskins said. “If you can convince those downstate voters that you’re listen to them, that you understand their concerns, I think that buys a legitimacy with them.” ”

Kennedy’s sister Rory said that beyond blood, she believes in her brother’s ability and vision for Illinois in particular and America in general.

“I think (the Kennedy family) all feel that Illinois is lucky to have him as a choice. He’s a great listener. He’s a great organizer.”

Rory Kennedy said she expects her brother to continue pushing his message out through a grinding retail politics practiced before small crowds like Saturday’s.

“I think he will continue to, in settings like this, bring his message directly to the voters,” she said. “I think he’s not going to go through the regular establishment, because I think he feels that here in Illinois that there’s a lot of corruption.”

Asked if he was prepared to wage a long battle with Illinois’ political establishment, Kennedy scoffed.

“The establishment? Kennedys have (always) fought the establishment,” he said, running down a list of his relatives whom he said prevailed only after battling the status quo.

Before his uncle John F. Kennedy ran in the Presidential general election in 1960, Kennedy said, he was opposed by an establishment that saw him as too young and too Catholic to win. Both his father and his uncle Ted Kennedy, he noted, challenged sitting presidents of their own parties.

So you believe in the grass roots,” a reporter asked.