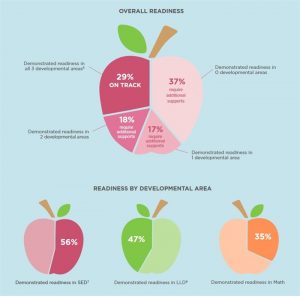 The latest Kindergarten Individual Development Survey shows there has been steady improvement over the last two years in the percentage of children entering kindergarten ready to learn. (Courtesy of Illinois State Board of Education).

SPRINGFIELD — The number of Illinois children entering kindergarten who are fully prepared to start school grew for the second consecutive year in 2019, a possible indication that the state’s increased spending on early childhood education is paying off.

But the latest kindergarten readiness report, released Aug. 24 by the Illinois State Board of Education, also showed that more than one-third of all pupils who entered kindergarten last year were unprepared across all three developmental areas that the state tries to measure.

“As a former kindergarten teacher, I believe that it is important to do everything possible to support Illinois children in those critical early years,” State Superintendent of Education Carmen Ayala said in a news release. “I want every child in the state to enter kindergarten with the cognitive skills to read, remember, pay attention, and solve problems, and the social-emotional skills to communicate, connect with others, display kindness, and cope with challenges.”

The numbers come from the third annual Kindergarten Individual Development Survey, or KIDS, a tool the state developed to allow school districts to use a uniform system of measuring a child’s development across three key areas — social and emotional, language and literacy, and math.

Under the program, kindergarten teachers are supposed to observe their pupils during the first 40 days of school using 14 different measurements to determine their readiness for school.

The latest report showed that 29 percent of the pupils entering kindergarten demonstrated readiness across all three developmental areas. That was up from 26 percent in 2018 and 24 percent in 2017, the first year of the program.

That same report also showed that 37 percent of last year’s kindergartners failed to show readiness across any of the three developmental areas. Still, that number was down from 39 percent in 2018 and 42 percent in 2017.

There were significant disparities between various racial and socio-economic groups, although some progress has been made.

For example, among pupils who qualify for free or reduced-price meals, only 20 percent demonstrated readiness across all three categories, although that was up from 18 percent in 2018 and 16 percent in 2017.

Meanwhile, only 14 percent of students from non-English speaking households demonstrated readiness across all three development areas, although that was up from 11 percent in 2018 and 10 percent in 2017.

And while 29 percent of students overall demonstrated readiness across all three categories, only 23 percent of Black students and 17 percent of Hispanics met that benchmark, compared to 35 percent of white and Asian students.

In its news release, ISBE attributed at least some of the growth to increased state spending on early childhood education. The budget that Gov. J.B. Pritzker proposed and lawmakers approved last year included an additional $50 million in the state’s Early Childhood Block Grant program to improve the quality and expand access to preschool programs.

Another $50 million was added in the current fiscal year’s budget, but due to revenue shortfalls that have resulted from the recession brought on by the COVID-19 pandemic, state budget officials have said it remains uncertain whether the entire budget will be funded.

ISBE did note, however, that Pritzker has set aside $270 million for a Child Care Recovery Grant program, the largest such program in the nation. He has also dedicated $10 million of the Governor’s Education Emergency Relief Fund to support early learning programs in areas hardest hit by the pandemic.