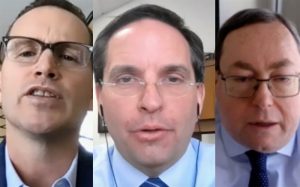 One week after Illinois Department of Employment Security Acting Director Kristin Richards testified before the Senate Labor Committee, labor and business leaders came before the committee regarding changes they would like to see made as the state grapples with continued economic fallout amid the COVID-19 pandemic.

Pat Devaney, secretary treasurer for the Illinois AFL-CIO, which is a federation of labor unions, said Wednesday that IDES was not adequately prepared to manage the initial flood of unemployment insurance requests amid COVID-19 but has done well to rebound and improve services.

Devaney called on legislators to prioritize support for the department ahead of what he referred to as a “bleak picture” of the state’s financial future.

“I would suggest that our experiences, observations and frustration caused by the inadequate investment in IDES should be an illustration on why we should invest in our state agencies,” Devaney said in his testimony.

Devaney commended the department for implementing five federal unemployment support programs, improving communication with claimants and bringing on additional staff in a timely manner. He said the department’s addition of 1,500 new staff members has allowed it to handle twice as many calls as it was previously.

Devaney and other labor leaders called on legislators to continue to take steps to protect unemployed workers as the state works to rebound from COVID-19.

Jeremy Rosen, director of economic justice at the Shriver Center on Poverty Law, said continued state and federal support will be key in assisting populations that have been hardest hit by the pandemic such as hospitality workers and minority populations.

Pritzker called on lawmakers to pass a $60 million supplement to IDES for the current fiscal year to allow for more federal funding, as well as a $73 million federal funding increase in the upcoming fiscal year.

“While the pandemic has been hard on all workers, it’s been particularly hard on Black and Latinx workers,” Rosen said. “We’re strongly concerned that IDES has not risen to the occasion to provide these workers with the benefits they need to survive during this time.”

Rosen called for IDES to reopen all its facilities for in-person services in order to better meet the needs of individuals who may not have easy access to technology, and for a more user-friendly unemployment insurance application process.

Rosen said that this could be accomplished by dividing claimant calls into categories to separate quick technical support calls from more in-depth inquiries, as well as offering informational materials on the department’s website in more languages.

Both Devaney and Rosen called on the state to cease requiring claimants to pay back overpayments that the state may have issued at no fault of the claimant, and for the state to allow non-instructional education workers such as bus drivers and cafeteria employees to continue to file for unemployment insurance if their schools are not operating in-person.

Richards, the acting IDES director, told the committee last week that the department was implementing a waiver system to allow claimants who received overpayments to apply to have their repayment requirements forgiven if the overpayments were not their fault.

By law, claimants who were overpaid benefits must repay the money they were not due under unemployment laws. The waiver authority provided in federal law allows the state to waive the repayment in certain circumstances if the overpayment was not the fault of the claimant.

The overpayment waivers are available through the federal Continued Assistance for Unemployed Workers Actwhich was signed into federal law in December.

Rob Karr, president and CEO of the Illinois Retail Merchants Association, told the committee that current projections for the unemployment insurance trust fund deficit as a result of COVID-19 are in the area of $8-11 billion.

Karr said the largest the deficit has ever been was 2.35 billion dollars in the aftermath of the 2008 recession.

“We’re talking about a problem that is somewhere between 250 percent and 370 percent bigger than it’s ever been,” Karr said. “That only gets made up by tax increases on employers, benefit cuts on laid off workers, or some combination thereof.”

Karr said that he and labor leaders like Devaney have been working together to lobby the federal government to offer support and help stabilize funding for the unemployment insurance trust funds.

“That number is big enough that it is crippling for both sides,” Karr added. tkirsininkas@capitolnewsillinois.com