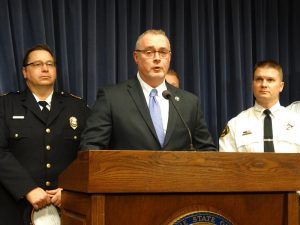 “We’re here to say we cannot, and unequivocally do not, support efforts being discussed to eliminate cash bail,” Jim Kaitschuk, executive director of the Illinois Sheriffs’ Association, said during a news conference. “This is not the way to make the criminal justice system more equitable. It is not the way to make our communities safer.”

Illinois enacted significant bail reform in 2017. Under the new system, people charged with most nonviolent crimes do not have to post a cash bond to get out of jail, but they may be subjected to other limitations such as house arrest or wearing some kind of electronic monitoring device.

Advocates for eliminating cash bail say the system is unfair to poor people who cannot afford their bail and it forces many of them to plead guilty simply so they can get out of jail. People who can afford their bail, on the other hand, often have better outcomes in their cases because they have more time to work with their attorney.

But McDonough County Sheriff Nicholas Petitgout said bail is also an effective way to ensure someone will make their court appearances. Since the 2017 reforms went into effect, he said, the number of warrants issued in his western Illinois county has more than doubled, from fewer than 1,000 per year before the change in law to more than 2,000 per year.

“Since the reform, if you’re a criminal, you are twice as likely to have a warrant (for failure to appear) and half as likely to cooperate with the criminal justice system,” he said.

Springfield Police Chief Kenny Winslow said judges already have authority to lower a bond amount or release people on their own recognizance if they deem an initial bond amount is too high.

“We just think that going to the far extreme of abolishing cash bail is the wrong way to go right now,” he said.

So far, only a handful of states have eliminated cash bail, the most recent being New York, whose new law took effect Jan. 1. Since then, some law enforcement officials argue, New York City has seen a significant spike in crime including violent crimes committed by people on pre-trial release.

“Just days after New York ended cash bail, there was a rash of individuals who were arrested,” Petitgout said. “While they were let out awaiting trial they committed significant crimes again. We’re not talking about small crimes. We’re talking about murder.”

Kaitschuk acknowledged that much of the information about New York is anecdotal, “but certainly you’ve seen a rise or spike in crime that, regardless of party, people are saying across the board it’s been a problem.”

Supporters of eliminating cash bail in Illinois have not yet introduced a bill.