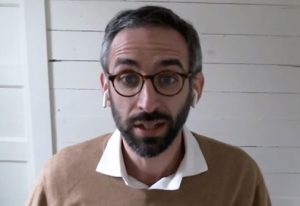 State Rep. Will Guzzardi, D-Chicago, introduces House Bill 116, a measure that would repeal the state’s ban on rent control, during a House Housing Committee on Wednesday, March 24. (ilga.gov)

SPRINGFIELD – The House Committee on Housing on advanced a bill Wednesday, March 24 that would allow local municipalities to implement measures regarding rent control.

Guzzardi said the rent control repeal would aim to give more “flexibility” to local municipalities in order to make their own decisions regarding rental costs.

“This law that’s on the books right now preempts every municipality in the state of Illinois from passing any ordinance that would constrain in any way a landlord’s ability to raise the rent by any amount,” Guzzardi said. “It is a blanket, wide-ranging preemption which I believe simply goes too far.”

Guzzardi said he first tried to introduce the measure four years ago as a result of ongoing gentrification efforts in the area he represents in Chicago, which includes the neighborhoods of Logan Square and Portage Park.

Guzzardi told the committee that he had heard stories from low-income constituents who saw their residential units purchased by developers who subsequently increased their monthly rent by as much as 25 to 50 percent.

He said the rent increases were used as “a means of displacing” low-income residents in favor of higher-income individuals who could afford the higher rents.

“I believe in my heart that it’s possible for a municipality to craft an ordinance that would allow landlords to increase rents by modest amounts to keep up with things like property tax and maintenance while also preventing the types of abuses I just described,” Guzzardi told the committee.

Proponents of the legislation, including advocates from the Lift the Ban Coalition, said that small landlords and low-income tenants are being “threatened” by economic forces in areas like Chicago.

William Lamme, a landlord in Chicago’s Little Village neighborhood and a member of the Lift the Ban Coalition, said that repealing the state’s restrictions on rent control would allow community members to stay in place and neighborhoods to retain their identity.

“We have become an investment opportunity for real estate developers,” Lamme said. “Rents and housing prices are already rising, people are being forced to move out of the neighborhood.”

Lamme said as a result of repealing the ban on rent control, local governing bodies could have the ability to impose more measured restrictions on rent prices and encourage them to work with landlords on imposing rent costs that would allow residents to stay in their homes while still allowing landlords to pay property taxes and maintenance fees.

Opponents of the legislation said repealing the blanket ban on rent control would impose unnecessary burdens on landlords and developers who manage multiple properties around the state. Those property owners would have to follow a “patchwork” of differing rules regarding rent as result, they argued.

“The way this is written, you could have a thousand sets of rules throughout the state,” said Rep. Andrew Chesney, R-Freeport. “Because it’s so vague, you’re giving no investor any certainty.”

Opponents also argued that the legislation does not address the underlying causes of housing insecurity in the state such as high property taxes and access to affordable housing stock.

Michael Mini, executive vice president of the Chicagoland Apartment Association, told the committee that caps on rental costs “fail to help those it’s intended to serve,” saying instead that the repeal of the blanket ban could cause developers and landlords to pull out of the state and contribute to a shortage in available housing.

“The best way to address the need for affordable housing is to support proposals that ultimately lead to the creation of more apartments, rent control is not the answer,” Mini said.

Some legislators on the committee acknowledged that lifting the ban on rent control would not offer a singular solution to the affordable housing crisis, but would be a step in the right direction to offer support to low-income tenants and “mom and pop” landlords.

Rep. Kelly Cassidy, D-Chicago, described lifting the ban on rent control as “a tool towards solving the housing crisis.”

“There’s not a single solution to this, this isn’t the silver bullet, nor is it the death knell to affordable housing,” Cassidy said. “I just encourage us all to stop with the extremes and look at this as a tool that we need and move forward.”

The bill passed the Housing Committee with 13 representatives voting in favor and 9 against.