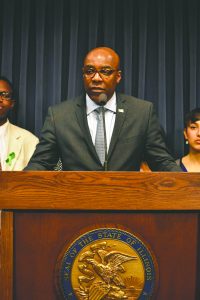 Attorney General Kwame Raoul speaks during a news conference May 15 at the Statehouse. Raoul’s office has been asked by nine lawmakers to investigate the business practices of the College Board and its practice of selling data it collects from students who take the SAT and PSAT exams. (File photo by Lindsey Salvatelli/Capitol News Illinois)

SPRINGFIELD — Nine Democratic lawmakers are calling on Illinois Attorney General Kwame Raoul to investigate the business practices of the College Board and sale of data it collects from students who take the SAT and PSAT exams.

The action comes about a week before high school students throughout the state are due to take the Preliminary Scholastic Aptitude Test, or PSAT, which among other things is used to determine eligibility for National Merit Scholarships.

Next spring, high school juniors throughout the state will take the SAT, a college entrance exam that the state mandates as part of its school accountability program.

The College Board’s practice of selling student data through its program called Student Search Service was the subject of national news reports by the New York Times and Washington Post, among others.

In May, a representative from the College Board, Todd Iverson, confirmed to the state Senate Judiciary Committee that the company sells access to data from Illinois students for 45 cents per student. That testimony came as the panel was considering legislation to strengthen the state’s Student Online Personal Protection Act.

But Sara Sympson, a spokeswoman for the College Board, said in an email Oct. 10 the nonprofit company does not “sell” the data but, rather, makes the information available “under strict licensing agreements with colleges, scholarship partners, and nonprofit organizations.”

The program is voluntary, she said, and students must “affirmatively declare” they want to have conversations with schools and scholarship providers.

Those who access the data, she said, must adhere to precise rules that require the data be used for only noncommercial, education-related purposes. They also must agree not to share student information with third parties, other than mail service providers and other contractors, and they must destroy the data once their agreement expires.

“Students and their families need information to help them navigate the winding and complicated path to college and career,” Sympson said. “Student Search fills that need, providing information that can support their transition to college, particularly for historically underrepresented student populations who are already disproportionately unlikely to apply, enroll, and graduate from college.”

But the group of lawmakers urging Raoul to investigate argued that the College Board is less than transparent about the program.

“Although the College Board asks students for their consent (including those under age 18) for disclosing their data to colleges, universities and scholarship providers, they do not inform either students or parents that they will be providing the data to these organizations in exchange for a monetary payment,” the lawmakers said in a letter to Raoul.

The data involved in the program includes not just students’ test scores, but also information they provide on survey questionnaires that accompany those exams, such as their academic interests and their activities in high school. Colleges, universities and scholarship programs buy the data to identify prospective students.

The lawmakers also noted the College Board is a significant vendor for the state. It has a $29 million contract with the Illinois State Board of Education for the SAT and PSAT exams, and last year it was paid more than $2 million to cover fees for Advanced Placement Tests for low-income students.

The lawmakers said the practice of selling student data might violate at least two state laws, the Student Online Privacy Protection Act, which prohibits businesses that provide online services to schools from selling or leasing student data, and the Children’s Privacy Protection and Parental Empowerment Act, which bars sale of data of children under 16 without parental consent.

The letter was signed by Democratic Sens. Cristina Castro, of Elgin; Robert Martwick, of Chicago; Laura Murphy, of Des Plaines; and Robert Peters, of Chicago. Democratic Reps. Robyn Gabel, of Evanston and Will Guzzardi, Lindsey LaPointe, Aaron Ortiz and Ann Williams, all of Chicago, also signed on.

A spokeswoman for Raoul said in an email the office is aware of the lawmakers’ concerns and is looking into the matter.

Cassie Creswell, who heads the advocacy group Illinois Families for Public Schools, said in an interview that Raoul’s office has worked with students and parents to fill out consumer complaint forms so the office can begin an investigation.