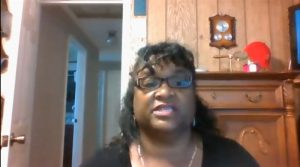 Brenda Dixon, the Illinois State Board of Education’s chief research and evaluation director, speaks to a Senate Committee on the importance of early childhood education Thursday, Sept. 24 via videoconference. (Blueroomstream.com)

SPRINGFIELD — Illinois lawmakers may soon consider legislation to lower the state’s compulsory attendance law to include 5-year-olds, a measure advocates see as a way to expand access to early childhood education opportunities, especially among Black and low-income families.

“We firmly believe that lowering the compulsory school age to 5 will ensure that all children have a better opportunity to receive a strong foundation of literacy and reading skills that will set them up for success in all aspects of their lives,” Brenda Dixon, ISBE’s chief research and evaluation director, said during the hearing that was conducted via Zoom.

Currently, Illinois only requires children between the ages of 6 and 17 to attend school, which effectively makes kindergarten optional. Currently, Dixon said, about 130,000 children attend kindergarten in Illinois public schools, but lowering the compulsory attendance age to 5 could boost that number by as many as 3,000, or 2.3 percent.

“We believe lowering the compulsory school age to 5 will support more equitable educational opportunities for our youngest learners, and build on the state’s investment in early childhood education,” Dixon said. “Kindergarten for all will strengthen the learning continuum for Illinois students.”

Thursday’s hearing was just one in a series of hearings that the Illinois Legislative Black Caucus has called to discuss issues surrounding racial inequities. Earlier this month, the ILBC said it was developing a legislative agenda for racial equity that would be based on four “pillars.”

Besides education and workforce development, which was the subject of Thursday’s hearing, the other pillars include criminal justice reform; economic access, equity and opportunity; and health care and human services.

Dixon noted that students who don’t start school until the first grade are at an immediate disadvantage with their peers who went to kindergarten, and they rarely get the opportunity to catch up.

“There is no catch-up time built into our school calendar for children who enter the public school system underprepared,” she said. “Once established, gaps in school readiness skills are difficult and costly to remedy, leading to pronounced gaps in achievement. We firmly believe that lowering the compulsory school age to 5 will ensure that all children have a better opportunity to receive a strong foundation of literacy and reading skills that will set them up for success in all aspects of their lives.”

Christopher Span, a researcher and associate dean at the University of Illinois Urbana-Champaign’s College of Education, said that for most of America’s history, Black children were specifically excluded from access to public education, even after the landmark 1954 U.S. Supreme Court case Brown vs. Topeka Board of Education.

“One thing that I was able to kind of show in my research is that as schooling became more compulsory, you saw African-Americans close the gap in what we call gaps of achievement in school communities,” he said. “And we also see it with regards to the closing of the gap in terms of educational attainment — so, gaining access to high school, gaining access to college degrees.”

While there appeared to be broad support among educators for lowering the mandatory school age in order to expand access to kindergarten, there was much less support for one of the other proposals being considered — a requirement that students be held back in the third grade if, by the end of that year, they still are not meeting state standards for reading and math skills.

It is often said among educators that from kindergarten through third grade, students learn to read, and from fourth grade on, they read to learn. That means students who enter fourth grade without the reading skills needed for fourth-grade work are likely to fall further and further behind for the rest of their time in school.

But Dixon and others said mandatory retention policies have been shown to do more harm than good.

Dixon said if that policy were in place today, based on the most recent state assessments, 85,000 to 90,000 third-graders, or 72 percent, would be held back from going on to fourth grade. Of those, roughly 80 percent are Black and brown students, and 85 percent are from low-income families.

“What is most important when it comes to the policy on third grade retention is what we do the years preceding third grade,” Dixon said.

The two committees are scheduled to hold another joint hearing on Wednesday, Sept. 30. The subjects of that hearing will be COVID-19 responses in K-12 education and equitable funding.