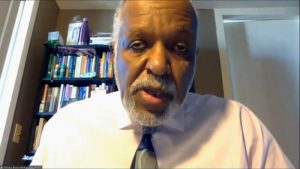 Bruce Montgomery, founder and CEO of the Entrepreneur Success Program in Chicago, testifies during a virtual committee hearing Thursday, Oct. 8 that focused on business development in Black communities. (Blueroomstream.com)

SPRINGFIELD – Black-owned businesses in Illinois face significant barriers to growth and opportunities that would enable them to compete with their white-owned counterparts, a problem that many Black leaders say is directly tied to Black unemployment rates and the deterioration of Black neighborhoods.

That was the message state lawmakers heard Thursday, Oct. 8 when three Senate committees held a virtual joint hearing that focused on entrepreneurship and financial development for Black business owners.

“If you drive or walk through our communities, especially on the south and west sides and other areas of the state, our areas look like a war zone,” said Sen. Mattie Hunter, D-Chicago, chair of the Senate Executive Committee. “And we keep saying well, how are our communities? Why are they looking so poorer and poorer and poorer every single day? It’s because of the disparity and funding. That’s the problem, you guys.”

The Oct. 8 hearing was part of a series of legislative meetings called by the Illinois Legislative Black Caucus to discuss that group’s agenda for the upcoming fall veto session. One of the four “pillars” of that agenda is economic access, equity and opportunity.

Jason Johnson, director of the Chicago Urban League’s Center for Entrepreneurship and Innovation, testified that Black Americans make up 13 percent of the U.S. population, but only 9 percent of businesses, and those businesses account for less than 0.5 percent of all business revenues on an annual basis.

“So as you can see, there’s definitely disparities where there’s not parity between the actual population and the number of African Americans engaging in entrepreneurship, and definitely not parity when it comes to the amount of revenue that’s being generated,” Johnson said.

As a result, he said, Black-owned businesses, “aren’t able to create jobs, people aren’t employed, people are unemployed, which leads to issues such as crime and things like that; no tax base in the community, which leads to poorly funded education and the cycle continues.”

Bruce Montgomery, founder and CEO of the Entrepreneur Success Program in Chicago, said there are a wide variety of services available to help start-up companies get off the ground. But he also said the COVID-19 pandemic has changed the landscape for entrepreneurs, possibly forever, and he said the state needs to play a role in making sure minority-owned businesses can gain a footing in the new economy.

“Clearly COVID has demonstrated the tremendous need, like right now, what we’re doing right now, connecting through broadband, to have a conversation with our state support mechanisms,” he said.

Even in Chicago, he said, many homes and businesses are not online because broadband technology is not available, which severely limits their ability to participate in an online economy.

“For those that don’t know, going back to what was is no longer an option,” Montgomery said. “There is no good old days. Those days are gone forever.”

Much of the focus of the hearing was on state government, and its ability to spur business development through its own contracting and purchasing policies.

“We must look at this economy moving forward and recognize that inside of a $40 billion state of Illinois budget, how is every department … spending that money with their constituents, Black constituents, so that they can be full participants in providing goods and services to the state of Illinois,” Montgomery said.

Christyn Freeman, secretary of the Bronzeville Chamber of Commerce on the south side of Chicago and cofounder of a group called the Economic Justice League, said many Black-owned businesses have trouble tapping into markets like state contracting and vending, or even the federal Payroll Protection Program, because they operate in what she called the “shadow economy.”

“These are the businesses that don’t officially have a business license, that are not on anybody’s tax roster, and they are purposely avoiding participating in some of the mainstream,” she said. “But that is, in some cases, what some of these underserved communities are primarily made up of. And so when programs are created, like PPP, that address more of the institutionalized organizations, there’s still consistently is a huge gap for those organizations that operate within that shadow economy.”

Legislative Black Caucus members did not discuss any specific legislation that they want to address in the upcoming veto session at the hearing, although some said they do want to see more progress from the state in meeting goals for contracting with firms owned by minorities, women, veterans and disabled individuals.