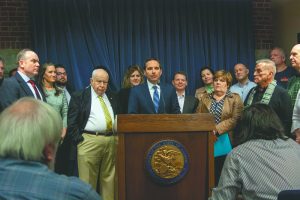 Rob Karr, president and CEO of the Illinois Retail Merchants Association, speaks during a news conference Feb. 11 at the Capitol in Springfield. The IMRA was one of the most vocal backers of an online sales tax measure approved by the General Assembly during its fall veto session. (Capitol News Illinois photo by Jerry Nowicki)

Supporters say the new law will ensure the state’s full 6.25 percent sales tax rate and any locally-imposed taxes will be collected at the point of destination on sales made through online marketplaces or by remote retailers that do a certain amount of business in the state.

While the state has already been collecting the revenue on several transactions, proponents say the recently passed bill is aimed at increasing compliance with an existing law created in response to a 2017 U.S. Supreme Court decision, South Dakota v. Wayfair Inc., which paved the way for state taxation on out-of-state retailers.

The Illinois Retail Merchants Association was one of the most vocal backers of the online sales tax measure. Rob Karr, IRMA’s president, said the change passed in the veto session would shift reporting requirements away from individual sellers, therefore streamlining tax remittance.

The new measure would require online marketplaces to collect and remit the tax to the state on behalf of the sellers that utilize their platforms, including third-party sellers.

“The marketplaces asked to do this because it’s just easier,” Karr said. “And it’s easier for the department of revenue and others to do it because now instead of having to monitor, audit every single marketplace seller, they now just do that for the marketplace facilitator.”

For remote retailers selling independent of online marketplaces, the tax would apply to those that do $100,000 or more worth of business or complete 200 or more separate transactions annually in Illinois, as they would be considered under law to be maintaining a place of business in the state. Karr said that threshold was deemed reasonable by the Supreme Court in the Wayfair decision.

Per the new legislation, these sellers would have the option to contract with certified service providers, which are companies that collect and remit the tax to the state. Those providers would retain the retailer’s discount of 1.75 percent of the taxes remitted, which the sellers would otherwise have been entitled to under state law.

The new legislation also reinserts use tax language which was removed when the original budget implementation bill passed in June. According to IRMA, the language is needed to protect state revenue in the event of an “adverse court decision” regarding the retail tax.

Per IRMA estimates, the added compliance resulting from the legislative fixes could result in more than $460 million in combined state and local revenue in fiscal year 2021, which begins July 1, 2020, and ends June 30, 2021. That sum breaks down to $200 million from remote retailer provisions for state government and $40 million resulting from locally-imposed taxes, and $180 million from state marketplace sales with $45 million generated for locally-imposed taxes.

The measure was passed as part of Senate Bill 119, a broad-ranging follow-up to the budget implementation bill passed in June. It had bipartisan support in both chambers and has been sent to Gov. J.B. Pritzker.