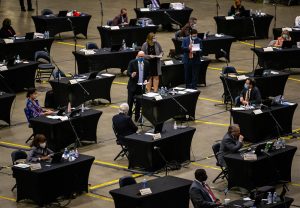 Rep. Greg Harris, D-Chicago, gives his opening remarks on SB 264, the state budget for the new fiscal year starting in July, during an extended session of the Illinois House of Representatives on Saturday night, May 23 at the Bank of Springfield Center in Springfield. (Pool photo by Justin L. Fowler/The State Journal-Register)

SPRINGFIELD – The Senate in the very early hours of Sunday morning (May 24) passed a budget package authorizing $42.8 billion in general revenue spending next year, although much of that remains tentative depending on the progression of the federfand potential congressional action that could send more financial aid to states. The House approved the budget bill late Saturday night.

The budget deal was worked out largely out of public view over the past two and a half months as lawmakers worked remotely in various informal “working groups,” and it continued to undergo changes in recent days in advance of the House debate.

One key to making the budget work is a plan to borrow up to $5 billion from the Federal Reserve’s Municipal Liquidity Facility program. That program allows the central bank to purchase certain short-term debt from states to help them make up for the loss of revenue they’ve seen since the pandemic forced them to close large parts of their economy.

It also authorizes another $1.5 billion in borrowing between the general revenue fund and various other state funds in order to maintain cash flow throughout the year.

House Majority Leader Gregory Harris, D-Chicago, said that by borrowing from the Fed, Illinois will be able to keep state spending for the fiscal year that begins July 1 largely at the same level as this year’s spending.

“If we’re going to balance the budget, I would rather not do it on the backs of people who would lose their jobs if we were to cut money to our schools, cut money to our first responders,” he said. “I don’t want thousands more people out of work.”

Lawmakers expect to pay back the Federal Reserve loan with federal funds they expect Congress to approve in the next stimulus package for states. But Congress has not yet authorized such a package and there is sharp disagreement between congressional Republicans and Democrats over what that plan should look like.

Both chambers of the Illinois Legislature passed a separate bill authorizing that borrowing Friday night.

“What we’ve heard today is a budget that is balanced only on a wing and a prayer,” said Republican Rep. Tom Demmer, of Dixon, the House GOP’s chief budget negotiator. 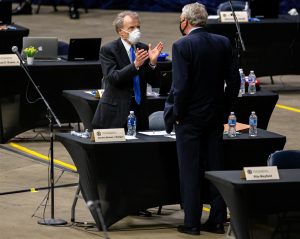 House Speaker Michael Madigan, D-Chicago, speaks with House Republican Leader Jim Durkin, R-Western Springs, during debate on SB 264, the state budget for the new fiscal year starting in July, during an extended session of the Illinois House of Representatives on Saturday night, May 23 at the Bank of Springfield Center in Springfield. (Pool photo by Justin L. Fowler/The State Journal-Register]

During the Senate debate that began after midnight, Sen. Dale Righter, R-Mattoon, said the Legislature is “gambling” with its budget plan.

The spending plan for the upcoming fiscal year is spelled out in Senate Bill 264. According to an analysis of the package that was circulating among lawmakers Saturday, it essentially calls for flat funding for most state programs, including K-12 schools, which will see no increase in their evidence-based funding over their current levels, although they will not see any decrease either.

Funding for state universities is also held flat at current-year levels, as is funding for the Monetary Aid Program, or MAP grants, and AIM HIGH grants.

A few state agencies are slated for increases in the new budget, including the Illinois Department of Public Health, the agency coordinating much of the state’s response to the COVID-19 pandemic. Its total budget, including federal funds, is slated to grow 144 percent, to more than $1.6 billion.

Included in that figure is $416 million in federal funds for testing and services provided by local health departments.

The Department on Aging, which would see an additional $58 million in order to raise wages for adult care providers, transportation and homemaker service providers to $14 per hour.

The Department of Children and Family Services is also slated for a 20-percent increase in general revenue funding, or about $170 million, to provide rate increases for foster care providers, to hire 123 investigative staff and to address caseload growth.

During debate in both chambers, Republicans urged delaying any action on a budget until the state has a better estimate of how much revenue it will receive in the coming year, as well as how much federal aid will be available, but Democrats did not entertain that suggestion

The 68-44 vote in the House to pass the budget bill appeared to fall largely along party lines, with Republicans arguing it relied too heavily on borrowing and not enough on fiscal restraint.

The budget package actually consists of two bills – an appropriations bill, Senate Bill 264, which authorizes spending by various state agencies; and a “budget implementation” bill, or “BIMP,” in legislative lingo, House Bill 64, that enables various agencies to carry out the budget.

The implementation bill sets up a number of new funds within state government that can receive and distribute money from the federal Coronavirus Aid, Relief and Economic Security Act, or CARES Act, a $2.2 trillion federal relief program that Congress approved earlier this year.

The state expects to receive about $3.3 billion through that program. Harris said that money is being earmarked for direct aid to the state’s health care industry to help hospitals, nursing homes, mental health centers and other care providers absorb the cost they’ve incurred for dealing with the pandemic.

He said another $1.8 billion is earmarked for the Illinois Emergency Management Agency, and it gives Gov. J.B. Pritzker authority to decide how it is spent.

That part especially infuriated Republicans who have complained about Pritzker governing by executive authority, and about the General Assembly not exercising its oversight role.

But Sen. Andy Manar, D-Bunker Hill, the Senate Democrats’ lead negotiator, said in an interview Friday that the federal money comes with significant strings attached and that it can be spent only for specific purposes, and therefore Pritzker will be restrained by federal rules.

But the implementation bill also gives the governor additional discretionary authority over the spending of state funds throughout the budget. Normally governors are allowed to shift up to 2 percent of an appropriation from one purpose to another, but this year’s bill expands that to 8 percent, something that angered many Republicans.

It also sets up a legislative oversight committee to monitor all executive spending in the budget as well as how CARES Act money distributed to local governments is spent.