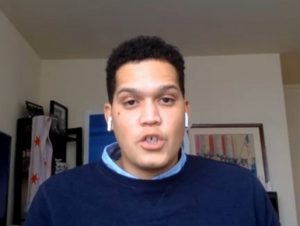 State Sen. Robert Peters speaks at a virtual committee hearing Tuesday, Oct. 20. He plans to sponsor a bill to end cash bond as a factor in preventing a suspect’s release. (Blueroomstream.com)

SPRINGFIELD — Some state lawmakers are looking to reform the cash bail system in Illinois, mainly by ending the use of money bonds as a factor in preventing a suspect’s release.

State Sen. Robert Peters and state Rep. Justin Slaughter, both Chicago Democrats, will attempt to end the use of money bonds by sponsoring a forthcoming, yet-to-be-filed bill known as the Pretrial Fairness Act.

In January, Gov. J.B. Pritzker put ending cash bail at the top of his administration’s criminal justice agenda for the year.

Bail is a set of conditions that can be set by the court that must be met in order to for a suspect to be released from custody before or after a conviction.

In Illinois, if a monetary bail is set, an individual in custody must pay 10 percent of the dollar amount set as a bond in order to be released. The state holds on to that 10 percent as collateral to encourage the defendant to return for their set court date. Failure to return on the set court date results in more legal penalties in addition to being responsible for paying the entire monetary bail set by the courts.

If the detainee cannot afford to pay that 10 percent bond, then they remain in custody until their trial date.

The majority of prisoners in Illinois are pretrial detainees, meaning they are imprisoned for crimes for which they have not been convicted. In the case of violent offenders, or detainees the courts determine pose a danger to the community, bail is denied entirely. But for many Illinoisans caught in the justice system, being stuck behind bars despite being presumed innocent is the cost of economic disparity and being unable to post bond for release.

“I don’t know if there’s a more obvious indicator that our society has a major issue with systemic injustices than the fact that a lack of pretrial fairness results in people staying locked up simply because they are poor,” Peters said in a news release. “There are many, many steps along the road toward winning real safety and justice, but the first is to abolish cash bail so that the rich don’t have a major advantage in our deeply flawed justice system.”

Peters said he is considering filing the bill for the upcoming fall veto session, but if he doesn’t think it has the necessary support to pass during the six-day session scheduled for Nov. 17-19 and Dec. 1-3, he would reintroduce it in 2021 during the regular session with a new General Assembly.

On Tuesday, Oct. 20, the Senate Criminal Law Committee and the Special Committee on Public Safety held a joint hearing, which Peters co-chaired, that brought in advocates, experts and detractors to testify regarding the proposition of ending cash bail.

The Coalition To End Money Bond, which has been lobbying for bail reform since 2016, partnered with Peters on multiple town halls and promotional materials to explain the Pretrial Fairness Act and garner support for its passage. Malik Alim served as one of the Coalition’s witnesses at the hearing.

“[Money bail] disproportionately affects Black communities,” Alim said. “A study from the University of California suggests that Black and brown people are more likely to be ordered to pay higher money bonds and given the real existence of the racial wealth gap those same people are less likely to bond out.”

That 2017 UCLA study found that in Los Angeles specifically, between 2012 and 2016, Black and Latina women disproportionately bore the financial cost of paying for bond. Of nearly $200 million paid for bail bonds over that period, $92.1 million was paid for by Latinos, $40.7 million by African Americans, and $37.9 million by white residents.

These numbers don’t translate directly to Illinois. Black Illinoisans, however, make up half of all jailed detainees, and about 60 percent of prison detainees, despite making up about 15 percent of the state’s population. According to the Illinois Criminal Justice Information Authority, about 90 percent of jailed individuals are pretrial detainees.

Witnesses from the coalition told lawmakers that the current system is wealth-based incarceration, and that a purely risk-based system would be more appropriate where only detainees determined to be potential risks can be held before their trial.

Wayne County Sheriff Mike Everett, testifying on behalf of the Illinois Sheriffs Association, provided an overview of concerns he said the Sheriffs Association and other law enforcement bodies had about ending cash bail. On the financial side, Everett said, falling budgets for agencies involved in the criminal justice system, unfunded mandates tied to imposed reforms, and a general loss of revenue for courts, law enforcement and victim services were all issues related to ending cash bail.

Everett likened cash bail to taxes, paying for a permit or applying for a license in that the cost of those actions and penalties help fund and sustain the system in charge of them.

Marcia Meis, director of the Administrative Office of the Illinois Courts, cited the Illinois Supreme Court’s commission on pretrial practices during her testimony at the hearing. That commission published its final report in April, which offered 54 recommendations for reforming the pretrial system to remove inequities and improve outcomes, as the current system is often discriminatory and does not follow the intent of the policies behind it.

Meis said the commission found the Illinois Supreme Court and the Illinois General Assembly “should implement rules and statutes to reflect the evolving goals of pretrial justice and resolve internal conflicts within the statutes that are inconsistent with the presumption that conditions of release will be non-monetary, least restrictive, and considerate of the financial ability of the accused. “

According to the testimony of Judge Robbin Stuckert, who chaired the pretrial practices commission, while the commission did not come to an agreement on whether or not to end cash bail, it’s clear the pretrial justice system in Illinois needs an overhaul.

“Establishing a robust and effective pretrial system in Illinois is the first and most crucial step towards minimizing and eventually eliminating cash bail,” she said. “However, simply eliminating cash bail at the outset without first implementing meaningful reforms and dedicating adequate resources to allow evidence-based risk assessment and supervision would be premature.”