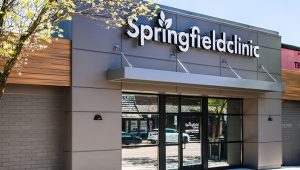 The Springfield Clinic in Peoria Heights is one of several medical centers operated by the healthcare system in central and southern Illinois. (Courtesy of springfieldclinic.com)

SPRINGFIELD – An ongoing contract dispute between a major health insurance company and a large health care provider is drawing the attention of both state lawmakers and the state Department of Insurance.

Blue Cross Blue Shield of Illinois has been under scrutiny since July after it failed to reach an agreement with Springfield Clinic to be part of the insurance company’s network. As a result, policy holders who receive care at that clinic have been forced to change providers or pay higher out-of-network copayments.

Springfield Clinic is a private, independent, for-profit health care provider that serves people in central Illinois. About 55,000 of those are Blue Cross members, according to Blue Cross.

On Monday, March 21, the Illinois Department of Insurance fined BCBS’s parent company, Health Care Service Corp., $339,000 for failing to notify the agency of a material change in its network, the first such fine the agency has ever issued since Illinois enacted the state’s Network Adequacy and Transparency Act in 2017.

Under that law, insurers are required to report to the agency any material change to an approved network plan within 15 days after the change occurs.

The official break between BCBS and Springfield Clinic took effect July 1 for its Health Maintenance Organization plans, and Nov. 17 for its Preferred Provider Organization plans. The company, however, did not formally notify the department of that change until earlier this month, resulting in a $1,000 fine for each day the filings were late.

For its part, BCBS has said the contract dispute centers on reimbursement rates. It says Springfield Clinic was seeking a 75 percent increase in its rates, which the insurance company says are already above average for the region and the state.

A spokesperson for Springfield Clinic did not immediately respond to a request for comment.

In a statement, BCBS senior vice president Krishna Ramachandran characterized the late filings as a misunderstanding.

“Though we had a reasonable and well-informed opinion that Springfield Clinic’s decision to leave our network did not trigger any network change filing, when the Department requested one within the past few weeks, we promptly complied,” he said. “As we evaluate the Department’s decision, we will continue to work collaboratively and in compliance with applicable laws and regulations while ensuring access, affordability and quality in health care for the more than 8 million Illinoisans we cover.”

The fine itself has proved to be controversial as well because although the 2017 law authorizes the Insurance Department to levy fines for noncompliance, the agency has never adopted formal administrative rules spelling out how the fines would be calculated and assessed.

That was the subject of discussion March 22 at a meeting of the Joint Committee on Administrative Rules, or JCAR, a legislative committee that exercises oversight of the administrative rulemaking process, where Republicans questioned why it has taken so long to promulgate rules.

But she said previous administrations at both the state and federal level showed little interest in regulatory enforcement.

“So the federal (Centers for Medicare and Medicaid Services) initially under the previous administration, they did not want to engage in network adequacy at all and had actually forced the feds to backtrack on the situation,” she said. “Under President Biden there has been a renewed interest in federal regulations on this topic. So, we have been very actively trying to dance to keep up with the updating federal regulations and make sure that they are enforced in full under the Illinois law that you all worked so hard to pass.”

Meanwhile, both BCBS and Springfield Clinic were scheduled to appear during the afternoon on Tuesday, March 22 before the House Insurance Committee. But that meeting was canceled because regular floor action in the House was delayed that day due to an extended closed-door Democratic caucus meeting that lasted over three hours.

A spokeswoman for the House Democrats said in an email that the hearing would be rescheduled but that an exact time and day has not been arranged between all the parties.