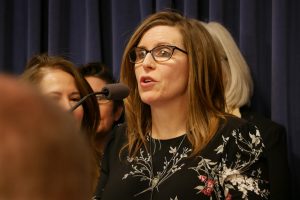 State Rep. Ann Williams, D-Chicago, speaks during a news conference Feb. 18 at the Capitol in Springfield to promote her House Bill 3335 as part of a package of bills to reduce plastic pollution. Williams’ bill would tax non-reusable carryout bags by 10 cents. (Photo by Ben Orner/Capitol News Illinois)

SPRINGFIELD – In an effort to tackle the growing problem of plastic pollution, a group of state lawmakers from both legislative chambers touted a series of bills Tuesday that would tax or ban single-use plastics and aim to boost recycling.

The four proposals have the support of organizations such as the Illinois Environmental Council and the Sierra Club of Illinois. Advocates said the aim is to increase sustainability, encourage environmental consciousness and improve the health and appearance of public spaces, land and waterways.

“We’re attacking this at every level to make sure that we really start to stem the tide of plastics in our society,” said state Rep. Bob Morgan, a Democrat from Deerfield, whose district borders Lake Michigan.

Nearly 11 million pounds of plastic waste enter Lake Michigan every year, according to a 2016 study by the Rochester Institute of Technology, the most of any of the Great Lakes.

Plastics do not decompose and instead break into smaller and smaller pieces that fish and other wildlife mistake for food. These microplastics can also slip through water treatment plants and into tap water. A study published last year in the journal Environmental Science & Technology found the average American ingests as many as 121,000 microplastics every year.

“The time is now to do something to save our environment from drowning in plastic,” said state Rep. Jennifer Gong-Gershowitz, a Democrat from Glenview and sponsor of House Bill 5169.

Her bill, along with an identical Senate Bill 3677, would ban polystyrene foam – commonly known as brand name Styrofoam – by 2022. Polystyrene is a nondegradable material used in house insulation, packaging and takeout food containers.

The series of bills includes one introduced during last year’s legislative session that would tax single-use paper, plastic and compostable bags that shoppers carry out from stores.

House Bill 3335 would place a 10-cent fee on each bag except in cities with more than 1 million people, which includes only Chicago which has an existing seven-cent tax.

Four other Illinois cities already tax or ban plastic bags as well, according to the American Recyclable Plastic Alliance, which advocates for plastic bag use. Edwardsville and Woodstock each tax 10 cents per bag, while Oak Park taxes the same amount for retailers over 5,000 square feet. Plastic bags are banned in Evanston.

Many chain stores and large grocers in Illinois, however, recycle customers’ used plastic bags, according to database maintained by the American Chemistry Council.

“Why would I pay for something that I’m already recycling?” said Susan Steele, a shopper in Springfield leaving a County Market location Tuesday where she says she recycles her plastic bags.

Under HB 3335, three cents would go back to retailers while the rest would be distributed to various environmental funds. Restaurants, food banks, food assistance programs and mobile food delivery are exempted from the bag tax.

“It really is incentivizing consumers to use reusable and recyclable bags,” Rep. Ann Williams, a Chicago Democrat and the House sponsor of the bag tax, said.

A University of Chicago study found disposable bag use fell 42 percent in Chicago in just the first month of the tax going into effect in 2017.

The House Revenue and Finance Committee will hear the bill on Thursday. An identical version in the other chamber, Senate Bill 3423, has yet to be assigned to a substantive committee.

Get paid to recycle

Three bills waiting on committee assignments focus on reducing plastic food waste. Senate Bill 3764 would give state contract preference to bidders who include compostable or recyclable food utensil use in their contracts. It also prohibits single-use plastic utensils at state parks and the Illinois State Fair after 2023.

House Bill 5552 and its identical counterpart, Senate Bill 3424, would make Illinois the 11th state with a container deposit program. People would be able to redeem plastic, glass or metal beverage containers for a 5-cent refund paid by the business or a redemption center.

“It’s a good business opportunity where you can make money not only as a commercial enterprise,” said Jennifer Walling, executive director of the Illinois Environmental Council.

She added that some people in states with these programs make money by picking up littered bottles.

HB 5552 and SB 3424 would also prohibit restaurants and takeout food services from giving customers single-use plastic utensils unless a customer asks for them.

“I go to a restaurant, they immediately give me a plastic straw. I order takeout, they throw in carryout utensils whether I want them or not,” Walling said. “I would say it is harder to create a lot of waste than it is to reduce your waste right now.”

All four proposals, however, may be a tough sell to businesses and industry groups.

“You’re putting a tax on every little product,” Karr said. “For consumers that’s nickel-and-diming them to death and for retailers you’re making that item much more expensive.”