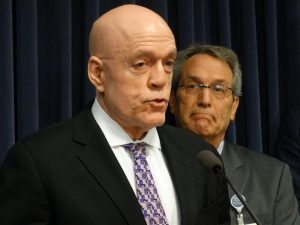 SPRINGFIELD — A bipartisan group of lawmakers is proposing strict new limits on health insurance policies that require patients to receive “prior authorization” from the company before they can receive certain treatments, tests or prescription drugs.

It’s a common practice under most health plans, one originally intended to hold down costs while making sure patients receive the appropriate care. But it’s one that many critics say has gotten out of control.

“Prior authorization is a process by which insurance companies look over the shoulder of patients and physicians to determine whether or not they’re going to pay for the medications, the tests, the treatments that you and your physician-led team have already agreed upon,” Paul Pedersen, a Bloomington physician and president of the Illinois State Medical Society, said during a news conference Feb. 18.

Pedersen was promoting the proposed Prior Authorization Reform Act — House Bill 5510 and Senate Bill 3822 — which has sponsors from both sides of the aisle in both chambers.

Among other things, it would require health plans to display prominently on their websites which services or treatments require prior authorization and what the clinical review criteria is for deciding whether or not it is covered. It also provides that those criteria be based on nationally recognized standards, that they be evidence-based and that they be “sufficiently flexible to allow deviations from norms when justified on a case-by-case basis.”

It would also prohibit insurance plans from imposing retroactive prior approval requirements – that is, denying a claim for failing to meet a prior authorization requirement that wasn’t in place at the time the care was provided.

“This is one of the most common complaints we get, of people who are coming in because either they or a member of their family or a child are having care delayed or denied because of the prior authorization process,” said House Democratic Leader Gregory Harris, of Chicago, lead sponsor of the House bill. “And this is not just in private insurance. It’s in our Medicaid and our MCO programs as well.”

Also speaking at the news conference was Isabella McKenna, a 20-year-old woman who, at age 14, was diagnosed with juvenile idiopathic arthritis that left her all but crippled.

At first, she said, her family’s insurance company denied authorization for an MRI, insisting instead that she undergo a series of X-rays. A year later, she was granted prior authorization and began treatment for an immune disease, but then four months later the company revoked its authorization, leaving the family with a mountain of medical bills.

At age 17, she said, her rheumatologist recommended a different treatment for her arthritis, starting the process over again. Finally, after her father retired from his job, she said, the company insisted on getting new prior authorizations for all of her medications.

Sen. Donald DeWitte, R-St. Charles, a cosponsor of the Senate bill, said those kinds of stories are not unusual.

“The horror stories we hear regularly — folks with cardiac issues who wait for 10 days for approval of a cardiac test and have a heart attack in the meantime; folks waiting for serious cancer surgery having their procedures approved but waiting because anesthesia has not been approved yet — it’s not an efficient way to run a system and the waste that goes into that bureaucracy costs everyone more money in the process,” he said.

Laura Minzer, president of the Illinois Life and Health Insurance Council, acknowledged during a separate interview there have been cases in which prior authorization requirements have been problematic for patients. But she said there are also cases in which doctors have been known to overbill for certain services, overprescribe certain medications such as opioids, or order unnecessary tests and procedures, believing they have to in order to avoid legal liability.

“From the insurance industry’s perspective, we stand ready to meet with the sponsors and stakeholders to find a middle ground,” Minzer said.